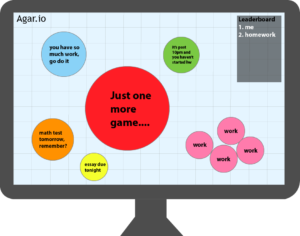 Photo by Anamika Anand
Don’t play agar.io before you do your homework.

Permalink
The accessibility of .io games contributes to a junior’s stress.

After coming home from an agonizing six hours of school, all I want to do is relax by playing video games. However, playing proper downloaded games with saved progress on school nights comes with a strong sense of guilt: Often, after spending an afternoon building my base in “Minecraft,” I look at the pile of work I need to start at 10 p.m. and then how much progress I’ve made and hate myself for wasting all that time. The solution I’ve found — which isn’t really a solution at all — is resorting to spontaneous .io mini games.

The difference between .io games and free downloadable games is that the former are so potentially fleeting: Your entire progress could be deleted in one simple click or a Wi-Fi outage. Even without the feature of saved progress, however, games like diep.io and agar.io are still fun due to the simplicity and skill required to master them. When I get bored of one game, simply clicking the search bar and typing in seven letters of another .io game renews my interest.

This cycle of game swapping led me to actually master a few .io games such as deeeep.io, agar.io, zombs.io, diep.io and become one of the top players, although this isn’t a fact I’m particularly proud of. In arras.io, a version of diep.io, I even held a world record for a few months, though it was mainly symbolic of the amount of time I wasted playing the game.

While mobile games like “Clash Royale” and “Genshin Impact” are also occasionally the root of my procrastination, the blame more often falls on .io games. Thanks to their accessibility on the web, I have yet to figure out a way to stop myself from falling into this rabbit hole whenever I get bored of a homework assignment. In the end, it all comes down to self-control, and I hope that’s something I can develop to leave these games behind.