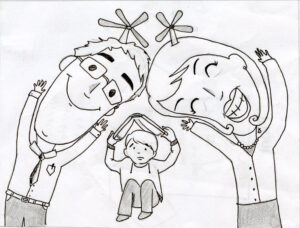 “How was school today?”

Many high school students are asked this question daily by their parents, and usually, if the student replies, it is with little interest, and silence follows.

But some parents are different. They ask not only this question but every question relative to a child’s life, questions like “Who are your friends?” and “Who are you talking to on the phone?” and sometimes even, “Should I be talking to your teachers about these missing homework assignments?”

These parents are known to high-schoolers as “helicopter parents.”

Helicopter parent is a term to describe parents who coddle their children to such an extent that it affects their social life. It’s not as politically correct as “overprotective,” and probably would not be welcome at the next dinner conversation with your parents. However, for today’s generation—and at Saratoga High—it is no rare occurrence.

Helicopter parents are usually easy to spot in large herds of parents at a family party, as they constantly chime into the conversation with boastful, over-comparative statements such as, “My eighth-grade son is in accelerated math and is practicing for his SATs. How’s your son doing?” The latter sentence is usually said with a slight tinge of sarcasm to another parent, exposing their true helicopter identity.

It’s disappointing that helicopter parents exist at all. Some friends of mine still live under their parents’ tough leadership and are never “available” to spend time with their peers. For the parents, the child is their whole life, and they guard him or her like it. Everything the child does is monitored and evaluated by the parent, a situation that can indirectly stunt a child’s growth.

High school should be a time to transition from being partly dependent on one’s parents to full independence. Parents cannot prepare their child for adult life ahead by pampering them. Giving them independence not only would benefit the child more, but it would also allow more freedom for the student to make his or her own choices.

Of course, helicopter parents are certainly well intentioned. They believe that what they are doing is for the best of the child. It is better to be overprotective than nonexistent. Their hearts are in the right places, but they are simply too involved.

Since it may be hard to change a protective parent’s views (or for that matter, any parent’s), it may be wiser for victims of helicopter parents to request slightly more independence and privacy, little by little. The parent might slowly begin to agree and start getting used to giving their child more independence. Just a thought.