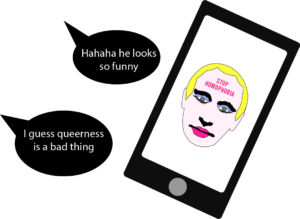 Permalink
Memes make too much light of a difficult situation and contribute to political radicalization.

The Russian invasion of Ukraine that began in February has received condemnation from people all across the world. Accompanying this crisis, however, is an onslaught of somewhat inappropriate memes that have overtaken social media. Most depict Zelensky (or Ukrainians) as “chads,” an internet depiction of ideal people through a blond, bearded character.

Though international conflicts often spawn memes and other jokes across the internet, such jokes should meet with widespread condemnation given the reality of the Ukrainian conflict, where thousands of people’s lives have been lost and many more are in danger.

One meme is labeled “Ukraine deployed their last defense forces,” and displays several pictures of angry-looking old ladies, which highlights the issues with many of these memes. Positivity itself isn’t an issue, but most of these memes display the Ukrainian side as easily winning and don’t display the dangers involved, especially when the memes describe Ukrainian farmers, or in this case, grandmas, as being strong or a significant fighting force. Even if some reports of farmers fighting or winning is grounded in reality, civilians being uprooted out of their lives to fight a dangerous war isn’t something to be glorified.

While I can see the utility of using memes to lighten the moods of those involved, posting memes on an English forum is far removed from those who actually need the levity. The spreading of memes only has the negative effects of unnecessarily glorifying the war and removing the capacity for healthy, complex discussions around the topic. Memes are simple: There’s a good side and a bad side. But as much as we want to have an underdog or a “right side” to root for, the actions of anyone in the conflict can still be morally questionable — even if Russia’s invasion of Ukraine is unjustified in the big picture.

Although I don’t want to veer into “both sides” territory, it’s important to acknowledge that blind worship and demonization of Ukrainians and Russians respectively isn’t great. It might seem obvious that Ukrainians can also commit war crimes — for instance, there is a video of Russian POWs being shot in the leg, although it is thankfully being verified and investigated by Ukraine — but I think a lot of people forget it.

With the invasion of Ukraine spearheaded by Putin, jokes about Putin are spreading like wildfire. Insulting a despot is understandable, but many of these memes depict Putin as effeminate or gay. It’s like insulting people’s appearances, which harms everyone who has those characteristics by association, when instead you can justifiably attack their actions. Although a common rhetoric is that it’s funny because Putin himself is homophobic and would hate to see himself depicted like this, these memes still associate queerness as something bad.

Most serious subjects can be lightened through the use of memes, but those memes should be at least funny — which none of these are, at least according to my warped sense of humor. The large majority of these memes, with only a few exceptions that include some kind of nuance, skew the truth of the conflict and inherently harm perceptions of pressing issues, inadvertently doing more harm than good.