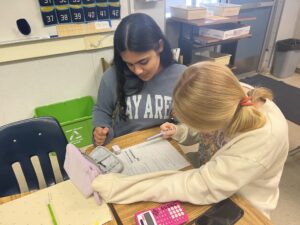 Algebra 1 Math Lab is hosted every Saturday in his room 301 from 9 to 11 a.m., excluding holidays and days when Yim is committed to referee swim races.

Currently, roughly six of his AP Calculus BC students volunteer to help four to 10 Algebra 1 students, who consistently show up. The goal of the program is to target help toward weaker skills and review concepts in preparation for upcoming quizzes and tests. Following each session, Yim also stays at school for another half hour to answer questions from the student tutors.

“The worst thing that could happen is if no one shows up,” Yim said. “If that happens, [the student tutors] just sit there and study for two hours and still receive their volunteer hours.”

For Yim, helping answer students with their questions has been a long-standing part of his Saturday routine. He recalls that when his now-adult daughter was a child, his students would often come to his room on Saturdays to ask him questions while he worked.

“I would have my kids there — I’m working on grading papers and stuff on Saturdays,” he said. “Everybody knew that I was there, and they would come for an hour and a half and then go home.”

This year, he formalized these study sessions and implemented peer tutoring, coining the term “Math Lab” to ensure students are not confused with any tutoring activities that occur during school hours. He has also begun using district-provided Kuta Software to automatically generate worksheets of algebra problems as additional practice for students, with customizable options for difficulty and content.

Yim said he has begun analyzing the data between the Unit 2 and Unit 3 tests and has noted improvement in students who come for help during Math Lab and tutorials. Though he has yet to fully run the numbers, he found that there appears to be “some indication that Math Lab is helping” and plans to continue running it second semester.

Junior Saara Saini, one of the AP Calculus BC student volunteers for Math Lab, said the opportunity is beneficial for both students and their peer tutors.

“It’s really good for [Algebra 1 students] because they’re able to ask questions and learn from their peers,” Saini said. “I also think tutoring helps the tutor as well because [in order] to explain a concept, you truly have to understand it. Algebra is very important in calculus, so I think it’s very helpful for me.”

According to Saini, Math Lab is structured so that tutors can approach students or students can walk up to tutors for help. Since there is typically a one-to-one student-tutor ratio, students can receive individualized attention and rotate between different tutors.

Saini feels that spending time at Math Lab has been worthwhile: Since her first session on Oct. 8, she has helped students work through word problems and deepen their understanding of the underlying concepts.

“[When I help a student], it’s a feeling of satisfaction because you know that you helped someone understand something, and it’s just really rewarding,” Saini said.