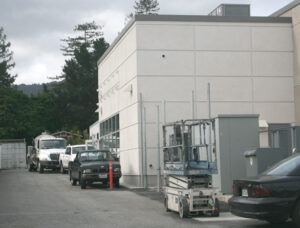 The MAP building is near completion.

Do you harbor the desire to record your band's music in a legitimate studio? Or maybe you have an idea for a Saratoga High sitcom? If you have an interest in performing arts and would maybe like access to some technology that would bring your art to all of Saratoga High then, next year, the new Multimedia Arts Building is exactly where you should head.

Do you harbor the desire to record your band’s music in a legitimate studio? Or maybe you have an idea for a Saratoga High sitcom? If you have an interest in performing arts and would maybe like access to some technology that would bring your art to all of Saratoga High then, next year, the new Multimedia Arts Building is exactly where you should head.

“You know what I’m looking for right now are students looking to do a show, or maybe in a band and they want to record the band, maybe there’s someone in the music department who wants to perform something, record themselves,” said Tony Palma, the digital media teacher in the Media Arts Program (MAP). “I’d love to have them start signing up; for some to come to me and say, ‘You know, Mr. Palma, I’ve got this band or I want to do a performance or record ourselves…when can we do that.’”

The building, located behind the gym and woodshop, will be approximately 4,800 square feet, and facilities will include a recording studio and other media arts technology. The new MAP Building will be done by the end of June, which is about a month later than its original deadline of May 2010.

“Well, we’ve unfortunately had some delays, due to the state of California. Some of it is financial crisis-related where the state fees were put on furlough for a while, part of it is due to the complication in plans…and that has pushed us back,” said Palma. “Now we’re looking at the end of June as the opening date.”

The new estimated cost of the building is $3.5 million, according to Palma, with a large part of the cost being paid by a state grant.

The center will be used as a base for the Multimedia Arts Program, which will hold English classes and Multimedia Journalism in the new building. There will also be media arts classes from the beginner to the advanced level in the building.

“The multimedia center is designed as a facility for doing video recording, for recording performances, and audio recordings, and that kind of thing, so we’d be using the space for that, and teaching classrooms,” said Palma. The center can also be used as a resource for students for recording bands or theater performances.

“That way we can have access for the MAP students to help those students record so that they can learn the technology behind it, and the use of the building increases,” said Palma, who hopes to integrate the MAP idea with all-round student access. “So if you’re in drama and you’re writing a play, let’s do it, let’s get the drama kids in there, get a set, record it, edit it, and we have a show.”

Meanwhile, the original MAP classroom, where most of the multimedia classes are held as of right now, is in limbo. Palma says the school and MAP organizers are still unsure of what to do with it once the MAP building opens.

Currently proposed ideas for its future use is as a facility for freshman English and Media Arts 9 or MAP Government classes.

“It wouldn’t be a classroom for teaching every day, but as the foreign language students have a computer lab, so this would be like that for English media arts and social studies media arts,” said Palma. Most of this depends on the funding the MAP program can get for the technology.

Another aspect of the room is the outside student involvement, as many students who are not part of the MAP program are encouraged to use the room as more of a student resource or for video or photo editing, although concerns exist about monitoring the security of the center and protecting the equipment from damage.

The MAP building will be set up during the summer and then most likely hold a opening ceremony on the first day of the 2010-11 school year.

“There’s lots of questions and not so many answers, but we’re looking into the future,” said Palma. “Mostly we want students to have as much access to technology, and that’s one of our potential opportunities we’re looking at.”