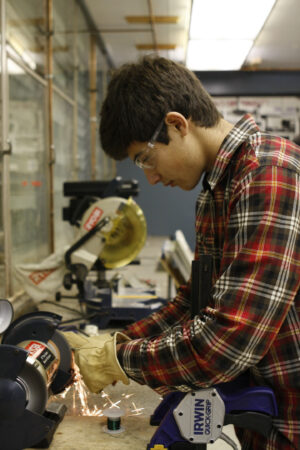 Following last year’s groundbreaking trip to the FIRST robotics competition in Atlanta, the Mechanical Science and Engineering Team (M-SET) has initiated the development of several new projects, including a robot for this year’s competition.

Following last year’s groundbreaking trip to the FIRST robotics competition in Atlanta, the Mechanical Science and Engineering Team (M-SET) has initiated the development of several new projects, including a robot for this year’s competition.

“The topic [what the robot will be doing this year] was announced on Jan. 8, but we won’t actually compete until mid-March,” said M-SET’s president, senior Cordell Hollingsworth. “We’re waiting until then to start up the development.”

The team is poised to repeat last year’s successes, having recently received a $5,000 grant from the National Aeronautics and Space Administration (NASA) to bolster its budget, according to Hollingsworth.

“NASA’s grant is going to be the first of many exciting developments that are coming our way,” Hollingsworth said.

The team, which has nearly doubled in size from last year to around 20 participants, is looking to take part in not only the usual local competition but also one in Seattle. Hollingsworth indicated that the majority of the budget will go toward expanding the team.

On Dec. 10, M-SET signed a letter of commitment with the Defense Advanced Research Projects Agency (DARPA) to participate in a multi-school robotics program that would have Saratoga participate in a two-year program involving university collaborations and extensive investments in the team. Hollingsworth said the details of the program are still up in the air, but that DARPA hinted that they would be investing “substantial amounts of money” in the team. Saratoga is one of four teams on the West Coast to be engaged by DARPA, with the other three teams being Palo Alto, Lynbrook and Homestead.

“DARPA is a widely recognized college robotics challenge, but it’s still not very clear why they are interested in us,” Hollingsworth said.

Junior Rod Jafari, who has been on the team for the past two years, said he is excited about the fiscal developments for the team.

“We had some trouble last year raising money that we can avoid this year, which is good because money is really key,” he said. “It’s an expensive club.”

Jafari said the team is also working on an $18,000 automated podium for the marching band, which they hope to have completed by the next season. Almost all of the funding for the podium was raised by sponsors.

By putting fiscal concerns on the back burner, the team has been focusing on the challenges it plans to take part in this year. Last year, the then-rookie team surmounted organizational obstacles and growing pains to earn a chance to compete in Atlanta. Jafari is optimistic the team can repeat their successes this year.

“We are technically strong and we all love robotics. That makes for a pretty good team,” Jafari said.