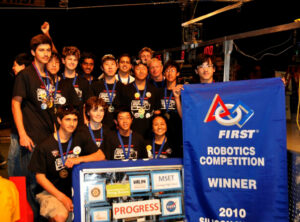 M-SET takes a team photo after their win that will take them to the national champtionship in Atlanta.

This time last year, the fate of Saratoga robotics remained uncertain. The Saratoga Robotics Team (SRT) was a casualty of the school's consolidation of clubs.

Determined to continue the school's robotics tradition, Cordell Hollingsworth, now a junior, assembled a team of 20 SRT veterans and enthusiastic rookies to create the Mechanical Science and Engineering Team (M-SET), which encompasses all the robotics that SRT did while adding other engineering disciplines such as rocketry.

This time last year, the fate of Saratoga robotics remained uncertain. The Saratoga Robotics Team (SRT) was a casualty of the school’s consolidation of clubs.

Determined to continue the school’s robotics tradition, Cordell Hollingsworth, now a junior, assembled a team of 20 SRT veterans and enthusiastic rookies to create the Mechanical Science and Engineering Team (M-SET), which encompasses all the robotics that SRT did while adding other engineering disciplines such as rocketry.

“I was disappointed that it was closed, so I decided to do something about it,” said Hollingsworth. “I guess it worked.”

M-SET has come a long way from these humble roots. On March 20, they won a prestigious bid to go to the national championship in Atlanta over spring break known as the FIRST Robotics Competition.

“We were definitely the underdogs in the competition, so it was a big deal to win,” said sophomore Rod Jafari, who manages the fabrication aspect of the team. “It was a really intense journey.”

The journey was not without obstacles. Everyone on the team, new members and old alike, appreciates the inordinate amount of work it took to achieve success. Apart from working every Sunday for two hours in the robotics room, members of the team grew accustomed to going to the room whenever they were free to work on the robot.

An average sized classroom next to the band room, room 903 is amply stocked with three computers and an array of tools essential for building robots. “The robotics room was really where it all took place,” said Jafari.

Deeply engaged by the engineering process, the members often lost track of time—staying in the robotics room late into the night in order to implement a function or work out problems.

“Sometimes we stayed up until midnight––even 1 a.m.––to finish something,” said Hollingsworth. “Once we spent more than a week trying to engineer a kicking function in the robot, then realizing that it wouldn’t really help in competitions. There were a lot of challenges like that.”

At the beginning, though, Hollingsworth says, engineering problems were the last things on their minds. “We had to focus on getting funding to buy materials and enter competitions,” he said. “It was a lot of logistical work.”

Initial funding for the club came to around $15,000—the majority of which was paid for by corporate sponsors like Valin Automation Controls, FESTO, and SolidWorks; and organizations such as the Saratoga Rotary Club. After funding was obtained, the team got to work immediately.
“We didn’t waste a minute,” Jafari said.

Through the experience, the 16-member team went from not knowing much about robotics to becoming pseudo-experts in the field—thanks to a dedicated set of parent-mentors and robotics alumni who guided and taught the team.

Their three months of hard work, both in logistics and engineering, ultimately culminated in “Progress”—a robot, controlled by an Xbox controller, known throughout the league for its speed, simplicity, and ingenious maneuvering system OmniDrive.

It was OmniDrive that allowed the robot to win the preliminary challenges and led them to the final round. The competition was not without problems, however. The battery the robot used was old and worn out, and during a few rounds of competition, failed.

“We dropped from being ranked in the top 10 teams in the competition out of 50 teams to 32nd place,” said sophomore programming lead Michael Zuccarino. “Luckily, we still made it to the final round.”

The robot’s speed, both Jafari and Hollingsworth note, was particularly suited to the final round of competition.

“The challenge was to use your team’s robot to play soccer, and speed is very important in soccer,” said Jafari. The teams competing, Jafari said, were asked to divide themselves into groups for soccer.

As one of the six winners of the competition along with the other members of their alliance, Saratoga now is in line to go to the FRC national competition in Atlanta, where they will be one of 350 teams to compete.

However, the team’s challenges are far from over. In a striking case of déjà vu, the new challenges they are facing are largely logistical in nature. To compete in the prestigious Atlanta competition, they need to raise another $17,000 to pay for the entrance fee, plane tickets, and accommodations for the entire team.

This may seem like an impossible feat, but the members of M-SET have shown that, regardless of the circumstances, they can make some substantial and definitive “Progress.” Zuccarino is confident of their participation in the national competition.

“Atlanta better watch out,” he said.

M-SET is selling shirts for $20 and buttons for $2 to raise money for their trip. To purchase these items, or to make a contribution, contact Francesca Ordona at francescaoh@ymail.com.