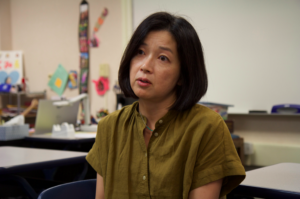 In 2012, Japanese fell from the list of foreign languages offered at the school due to a lack of enrollment.

This year, in response to student demand, Japanese has been brought back with 29 students along with Kumi Kobayashi, a native Japanese speaker as well as an experienced and enthusiastic teacher.

Born and raised in Fukuoka, Japan, Kobayashi dreamed of working overseas using her language skills. After graduating from Kitakyushu University with a bachelor’s degree in law, Kobayashi worked in a trading business for multiple years in Kitakyushu, Japan. She has been teaching at Los Gatos High for two years before deciding to teach a class at Saratoga High as well. During class, students work on all areas of communication, from speaking to writing, while also learning about Japanese culture. To ensure the comprehension of her lessons, students fill out surveys and take notes in class. At the moment, Kobayashi is focused on numbers, greetings, responses to simple questions and the Japanese writing system, a combination of logographic kanji and syllabic kana.

Kobayashi prepares lots of material for students and sets clear learning expectations for students as well as incorporating real-life context into lessons by using several authentic materials, texts and pictures for the class.

On a typical day, students log on, greet Kobayashi in Japanese and bow to show respect. After Kobayashi shows a few videos about the Japanese culture or language, she splits students into breakout rooms for them to practice speaking Japanese. Kobayashi goes to each breakout room to check the students’ understanding.

“My goals for teaching Japanese are helping my students to widen their perspectives of understanding a different culture and language and also help them to be able to communicate in Japanese in real life,” Kobayashi said. “I believe that it is important for the students to see the whole language and get used to being okay with not knowing everything.”

Sophomore Emerald Suzuki, who speaks fluent Japanese, said she took the class for the experience of learning Japanese in an academic environment and to further her understanding of the Japanese culture.

On the other hand, sophomore Atley Yuen said he did not know any Japanese coming into the class and that he had some initial worries about working online, but he feels that the class has smoothly adapted the curriculum to online. The class started with the basics like learning how to count to 20 in Japanese, which helped Yuen feel more at ease.

“I was a bit skeptical in choosing this class because I like to know what my teachers are like beforehand, but my first impressions of her were positive,” Yuen said.

Despite the challenges of starting virtually, Kobayashi is aiming to make the class a welcoming and friendly place for her students, where students are able to interact with each other in Japanese. Teaching online has opened up more ways for Kobayashi to deliver her lesson and for students to show their understanding. She designs her lessons based on the progress her students have made in class and makes sure that she helps everyone understand the material in a friendly and approachable way.

“There is always something new for me to learn, such as getting to know students, trying new ways to teach and new technology,” Kobayashi said.