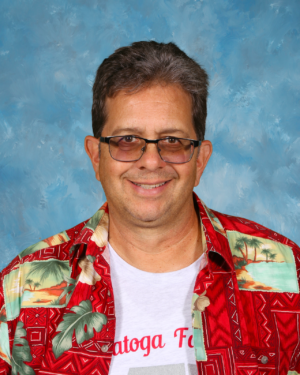 Heyman looks forward to an exciting new adventure with his wife, closing off 30 satisfying years in education

Librarian Kevin Heyman is retiring after 12 years as a central figure at SHS and 30 years as an educator. Because of budget issues, the district has chosen not to replace him.

During his first 10 years, Heyman taught history, economics and government and special education at Mt. Pleasant High School in San Jose. His love for research and reading motivated him to earn a master’s degree in Library and Information Science and a Library Media teaching credential from San Jose State University in 1998.

Beyond his duties as a librarian, Heyman has long advocated for the integration of technology in schools and runs the library media program. When Heyman came to SHS, he grew concerned seeing the school’s limited digital resources and attended countless district meetings throughout his tenure, arguing for more investment in technology-based materials.

Besides database and library management, Heyman has helped history teachers and students with the annual National History Day competition.

“Mr. Heyman is an active and accessible teacher, leading classes and supporting students to conduct original research in ways that not only help them learn more about their world now, but also prepare them to hit the ground running in college,” English teacher Amy Keys said.

Keys noted how knowledgeable Heyman was in teaching research methods himself, which has been extremely beneficial when carrying out research projects with her students.

Heyman worked extensively with teachers and provided resources for classes such as MAP 10 with English teacher Suzanne Herzman and AP Literature, English 12, English 11 and Creative Writing with Keys. Heyman led research in the History Bowl and Science Bowl events by ensuring that students had access to science database subscriptions and an outstanding collection of books by prominent scientists; he also attended the competitions with assistant principal Matthew Torrens.

After his long career, Heyman and his wife both made the decision to retire this year to spend more time with their family. His wife taught for 32 years at Independence High School.

“We are both ready for a new adventure in life,” Heyman said. “We have always enjoyed visiting national parks, camping and hiking; my wife and I plan on visiting as many parks as we can.”

They are moving to Sandy, Utah, to be close to Heyman’s family. His wife is from Hawaii, so they plan to spend around eight weeks a year visiting her family and enjoying activities in Hawaii such as hiking and swimming.

As Heyman closes off his 30th year in education, he said he especially values the time he spent at SHS and the connections he made along the way. He emphasized for students to “never stop reading books.”

“The first two decades of the 21st century have been an exciting time to be a librarian,” Heyman said. “I couldn’t be happier to have spent the last 20 years working in a library. I truly believe that I had the best job in education.”