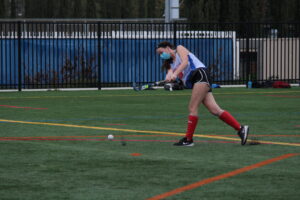 Oberhauser hits the ball during field hockey tryouts, the first of two training sessions she had to attend each day before she gave up soccer.

Exhausted and sore, senior Gwen Oberhauser made her way off the upper field. For a week, she had been attending two practices a day — one for field hockey and one for girls soccer — for a total of four hours each day.

Before COVID-19, she was able to play the sports she loves in separate seasons: field hockey in the fall and soccer during winter. Due to the pandemic, however, both field hockey and soccer are in Season 2.

At first, she pushed herself to play both sports, but after a week of attending two training sessions per day, she felt overwhelmed and realized she would only be able to choose one sport to play.

Oberhauser began soccer at 5 years old and began playing competitively when she was 9. In high school, she picked up field hockey due to its resemblance to soccer. She plays the same position — outside defense — for both sports.

Although she has played soccer for longer, Oberhauser chose to stick with hockey, mostly because she felt she had more of a leadership role and thus a larger impact on the team.

“As hard as it was to give up the sport I’ve been playing since I was little, I have tons of fun with my field hockey team, and I’m glad I will get my senior season,” Oberhauser said.

The girls’ soccer coach, Ben Maxwell, has been extremely supportive of her, Oberhauser said. Additionally, while her teammates are disappointed that Oberhauser won’t be playing soccer this year, they understand her choice.

“I know how much Gwen loves field hockey, and it must’ve been a hard decision,” said junior Raina Hirekatur, who has played on the girls soccer team alongside Oberhauser for the past two seasons.

Despite not being able to play both field hockey and soccer, Oberhauser is grateful that, at the very least, she’s back on the field playing a sport in her senior year.

“I will miss soccer for sure,” Oberhauser said. “But I wish the soccer team the best going forward and cherish the memories I made on that team.”