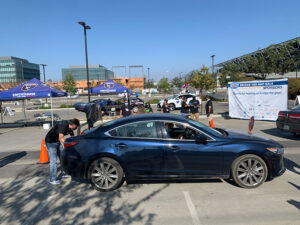 Hunger at Home volunteers fill up a person’s car with meals at their 2020 Drive-in gala.

In 2008, when Ewell Sterner, the former general manager at the San Jose Convention Center, founded Hunger at Home, an organization that connects those in need with thousands of pounds of food that would otherwise go to waste, he never imagined that his small company would end up supplying more than 4.1 million meals during the pandemic.

Before the pandemic, Hunger at Home partnered with convention centers, stadiums and hotels to collect food, which volunteers distributed to those facing food insecurity. In March 2020, however, Hunger at Home changed from being just a conduit to also being a production entity.

At the beginning of quarantine, the company received dozens of large donations from companies, hotels and stadiums that had numerous cancellations, Sterner said.

Facebook, for example, had organized a 4,000-person conference at the Fairmont that was canceled due to the pandemic, so there was a substantial amount of excess food to use. At the same time, many executive chefs, general managers, banquet leaders and restaurant servers who lost their jobs could join the team.

Almost overnight, Hunger at Home went from transporting meals to making them. At Levi’s Stadium, they made 73,000 meals daily, and at the San Jose convention center, they made thousands more. This process has still continued, even more than a year after the pandemic began.

Over the past year, organizations like Hunger at Home have been needed more than ever. The pandemic has caused millions to lose their jobs or their businesses, and the homeless population has grown and faced dire circumstances.

In August, USA Today detailed how even before the pandemic, the homeless population has historically lacked adequate hygiene supplies, such as areas to wash their hands. As different counties closed, this issue worsened; many homeless shelters closed due to quarantine regulations, leaving their former inhabitants without access to food, water and shelter.

According to the San Jose Spotlight, the city cleared out a homeless camp in December to make space for a trail renovation, disregarding the CDC recommendation to let encampments stay in place to prevent the spread of infections.

Around 40-50 residents of this camp were given the opportunity to move to a shelter before the camp was cleared, but only one agreed to move. One woman said she was previously assaulted when she was in a shelter.

“The number of cars [to pick up food] started at around 200,” Sterner said. “Then it went to 300. Then, what we saw was singular cars representing multiple families because they lost their means of transportation. Then, we started to see individuals that barely had enough room in their cars to hold their meals because they were living in their cars.”

Throughout the pandemic, the biggest obstacle that Hunger at Home has faced is fundraising. The organization had to pay for salaries, trucks, forklifts, pallet jacks and containers to carry the food — and it all costs money.

As a non-profit, its goal is to be funded just enough to keep operations running and feed as many food-insecure people as possible.

“When someone asks, ‘what is success for you?’ the answer to that is when we were able to employ 24 more people through a year of craziness and feed 4 million people,” Sterner said.

Regarding the government’s role in trying to solve the homelessness crisis, Sterner identified unrealistic Federal Emergency Management Agency (FEMA) regulations as a root cause of many problems that worsen homelessness.

Under FEMA regulations, many organizations are required to see citizenship documentation and register someone in the FEMA database. Hunger at Home decided to not ask for any of this personal data, saying these regulations just weren’t necessary “for a pandemic or for the unknown environment we were in,” Sterner said.

Because the organization, like so many others, didn’t report this information, it lost its federal funding.

Sterner also believes that the government has not properly addressed the high unemployment numbers and the worsening homelessness issue.

To help solve this problem, he said that the government needs to immediately create a task force of community members from all areas and put together a plan to end the homelessness problem in the area.

While the pandemic has caused many families to become homeless and face food insecurity, there can be light at the end of the tunnel if the government recognizes this problem and immediately takes action to seek long-term solutions, Sterner said. In the short term, however, he emphasized how important it is to have compassion and love for everyone during this difficult time.

“I call it one for one,” Sterner said. “If everybody takes one and tries to support one, the world will become a much better place for our kids and their kids.”