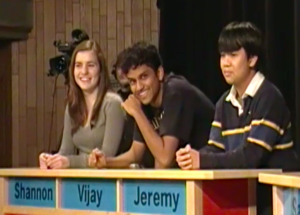 Seniors Shannon Galvin, Vijay Menon and Jeremy Pham appeared on the set of “Quiz Kids” with almost no preparation, no coach and only two fans. Their competitors from Terra Nova High School, which has competed in “Quiz Kids” for 12 years, sat poised in color-coordinated uniforms with study guides in hand and almost 30 supporters behind them. Somehow, the Saratoga team still defeated Terra Nova 340-130.

“I just got in their heads mentally,” joked Menon.

“Quiz Kids” is a high school academic tournament that airs on KRON-TV and is on its 12th season. Competing schools in the Bay Area send three students to vie for an all-expense paid trip to a location not yet selected. Questions cover a range of topics, including history, literature, math, science, geography, fine arts, sports and current events.

The game started out poorly for the Saratoga team. In the first round, Galvin, Menon and Pham worked together to answer three questions out of seven, tying Terra Nova 30-30 by the end of the round. By the end of the next round, a lightning round, the team trailed Terra Nova by 30 points, 100-70.

However, in a turn of events, Menon led the team to victory in the final lightning round, for a final score of 340-130.

Slightly intimidated by Terra Nova’s overwhelming number of fans, the team only had support from Galvin’s mother and Menon’s sister alongside a random Boy Scout troop.

“We had two fans; they had 30,” said Menon. “We didn’t want to tell anyone because we thought we were going to lose.”

Despite winning their first game without much preparation, the team plans to practice for future rounds. For the upcoming round in December, they hope to improve by practicing with Menon’s buzzers.

“I think we’re actually going to try to prepare for those,” said Galvin.