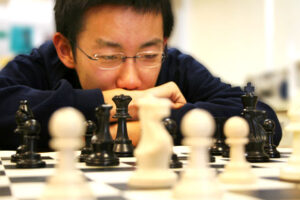 Senior Charles Sun, captain of the chess team, contemplates his next move.

Question: What is the school’s most dominant team or program?

Among the many possible answers: the girls’ tennis team, which won CCS this year and took second in Northern California; the boys’ swimming team, which set a national relay record last spring, or the marching band, which ranks near the top of the state in its division. These are all good guesses. But another, lesser known group has set the standard for excellence on campus: the chess team, winner of five straight state championships.

Meeting once a week during Thursday lunches in teacher and adviser P.J. Yim’s room, the chess team certainly does not get as much attention as it deserves.

“We’ve learned that chess doesn’t get a lot of attention,” said sophomore chess member Evan Ye. “Of course, more attention is nice but not critical in terms of success.”

Most students aren’t aware of the chess team’s remarkable streak.

“I honestly didn’t know much about the chess team,” said junior Walter Hsiang, “but I believe that the chess team deserves a lot more recognition, since it is so dominate and the game of chess requires a lot more cognitive skills than most people think.”

However, winning is not everything. Not only is the chess team a dominant powerhouse in the state, but also it is a team of “close-knit” camaraderie among seniors Charles Sun, Rolland Wu; junior Amol Aggarwal; sophomores Brian Wai, Ye, Sankash Shankar; and freshman Kevin Garbe.

“Because we spend so much time with each other during tournaments, we know each other pretty well,” said team captain Sun. “I think these experiences really bring the team together because they are memories that will stay with us for the rest of our lives.”

Because many members of the chess team have been playing chess competitively since elementary school, Ye credits the team’s exceptional record and wins to the “many talented members on the team.”

“Every member on the team is extremely gifted,” said Sun. “The team that we have now is almost a direct result of the individual effort that each person has put into the game. We push each other to the best of our abilities. When we see that someone is improving, our innate competitive nature tells us to work harder.”

While some members have private coaches for training, others simply practice their chess skills by playing online.

It also helps that all of the them really love the century-old board game.

“My favorite part of chess is the exhilaration of a good game,” said Sun. “I always get a good kick out of playing a formidable opponent, who can seemingly read my thoughts and vice versa. The game is as much mental as it is psychological and I love intellectually tearing my opponents apart.”

After winning the state championships five years in a row, the chess team is hoping to capture another victory on April 17-18 to extend its streak to a state-record sixth title in a row.

Standing between them and the state title is some tough competition though, including a Monta Vista team that edged Saratoga 4-3 at the Santa Clara League Face-off in January. The team’s primary rival, however, figures to be Mission San Jose, which also traditionally has had a strong chess program. Sun sees this year’s state championships essentially as a face-off between Saratoga and Mission San Jose, although he acknowledges anything can happen.

“I wouldn’t say that we are ‘anticipating’ another win,” said Sun, “but we are going to do everything in our power to make sure we win. I’ll be really bummed if the team lets down on a sixth consecutive title the year I graduate.”