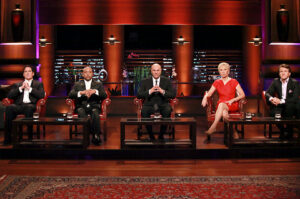 Senior Jason Li stood on stage in front of a small group of investors. With bright lights shining and cameras running, Li looked at the four "sharks" in front of him and delivered a confident, 2-minute pitch to potential investors.

On March 14 at 6 p.m. EST and 9 p.m PST, millions of Americans will see Li's pitch on an episode of "Shark Tank," a show on ABC in which investors listen to entrepreneurs who give short pitches about their company.

Last fall, Li traveled to Los Angeles to be filmed for an episode of “Shark Tank,” which features venture capitalists such as Daymond John, Mark Cuban and Lori Greiner.

Li’s company, iReTron, founded in November 2011, buys old electronics, refurbishes them and donates or resells the products to schools, hospitals or the general public. Li's business has been featured often in media reports, and Li himself was named the 25th smartest teenager in the world by an organization called The Best Schools.

Two years ago, Li was offered the opportunity to appear on the show as a contestant; however, Li declined because iReTron was not yet generating enough revenue. Disheartened by having to decline this once-in-a-lifetime opportunity, Li moved on and worked toward improving and expanding iReTron.

A year after the first offer, Li was asked again by the same producer to appear on the show.

“Going to Hollywood, getting my makeup done, staying in the Westin and being paid to travel was a really cool experience,” Li said.

After arriving in Los Angeles, he realized he would have to improve his usual pitch.

For the next two days, Li stayed in his hotel room drafting different angles and approaches to his pitch, hoping to eventually come across the perfect one.

After finally perfecting his pitch, Li practiced until it was showtime. When the time came for him to film, Li was nervous.

“The producers and my parents told me to smile, so I just smiled really awkwardly,” Li said. “One of the people even said, ‘Why does he look so happy,’ so that made me laugh a little and I calmed down.”

After filming, Li was ushered into another room to complete a debrief interview and then was taken to his trailer to meet his father. Li isn’t free to say what happened, yet all will be revealed on tonight’s show.

The exposure Li will receive from “Shark Tank” is like nothing he has ever experienced before.

“The amount of viewers on this show is absolutely incredible, and the most publicity I have ever gotten was being on newspapers like the Huffington Post and the San Francisco Chronicle,” Li said. “It’s a hefty amount of people, but definitely nothing of this caliber.”

Li said on top of knowing that his message was going to reach millions of people, he also felt a large sense of achievement.

“I've watched [‘Shark Tank’] for many years, and it’s really exciting to know that you get to live something that you idolize,” Li said.

Li left Los Angeles with more business wisdom than ever. He learned that as a businessman, he cannot back down regardless of the risks he is taking or what he wins or loses as a young entrepreneur.

“No one expects to succeed, but life is all about surprising yourself,” Li said. “You can't succeed if you view everything with a cost-benefit analysis. Instead, take risks and pursue genuine passion! It's always worth a shot.”