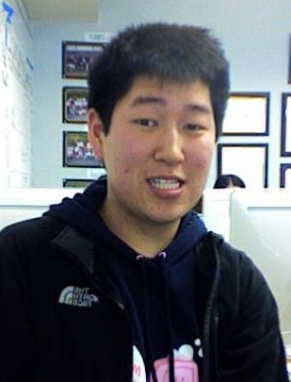 I hustled down the track—fists clenched and heart pounding—before my mind did a double-take, and I realized that, once again, my name at birth had been one-upped. Jokes and references aside, I’ll make it known here: I am a senior enrolled in physical education.

Along with the redesigned gym attire, revised curriculum that tends to stray away from the classics like dodgeball, and a natural reluctance to share with anyone which class I had during second period, the new name reference was only one of the many perks that came with saving P.E. for last.

I still remember sitting down with guidance counselor Frances Saiki going over the list of graduation requirements I had yet to fulfill. As I slowly sank into my seat, dreading the moment she would notice that I was missing two of the four required semesters of P.E., I kept telling myself that I’d take care of it, eventually, by taking up a sport like golf . Well, two years later, here we are.

But let me make myself clear: Being in P.E. wasn’t as bad as everyone made it out to to be. I won’t deny that, at first, it was a bit unnerving to tell friends which class I was heading to next, or to explain why I almost always plummeted into the Journalism Room couch in weakness at the beginning of third period. I will say, however, that as much as I feared being seen by friends dressed in a gym uniform, contorting myself for various workouts, the only person I had to be afraid of was myself.

We all feel the same way. It’s the class that isn’t necessarily difficult, but is merely something every student needs to do. While I stand as one of the tallest in class, overlooking a room of 30 or so sophomores and freshmen, I feel out-of-place a lot of the time, but blending in with a group of friends, including one other senior whose name will not be disclosed for obvious reasons, makes the once-dreadful class feel less embarrassing.

I will say, however, that at times I do wish I took advantage of that extra period during my sophomore year, because as far as I can remember, P.E. back then was much different than P.E. right now. I recall a time when fitness assessments came only twice a school year, workouts-of-the-day merely consisted of passing around a tennis ball on the courts, and written reflections at the end of class had yet to meet existence. While over the past semester I do remember playing basketball and badminton once or twice, the new curriculum in the class requires hours in the weight room, track and lots of strenuous workouts.

I’ll admit that in none of these settings am I an Adonis, but it beats lounging around at home after school re-watching episodes of “How I Met Your Mother,” as my bones slowly wither away from the lack of exercise. Sure, I consider my eating habits to have headed south as a side effect of the college application bombardment, but Mrs. Aoki’s P.E. has kept me in check.

As I headed into my second semester of senior year, I met a fork in the road. I had the choice of trying out for a sport and saying goodbye to P.E. for good, or sticking to my guns and keeping with my original plan to make my schedule the least complicated as possible. Let’s just say that as of today, I am a second semester senior who just enrolled in his fourth semester of P.E.