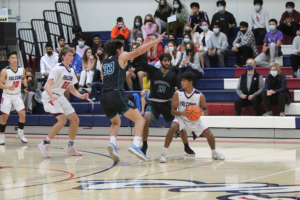 Junior Niveydh Pai looks for a pass during the Nov. 31 preseason home game against Homestead.

With the varsity boys’ basketball team trailing the Homestead Mustangs by just one point, senior point guard Christian Li cut toward the hoop and wrapped around a screen for a 3-pointer.

The Falcons started their preseason strong with a number of victories. Although they lost in a scrimmage to Santa Clara and beat Valley Christian on Nov. 13, on Nov. 27, they beat Newark Memorial 60-52 prior to the Homestead game..

In the first half of the game against the Mustangs, neither team was able to secure a substantial lead, and the game remained back-and-forth until the third quarter. Senior point guard Chris Liu didn’t like how they played.

“The game was a lot closer than it should have been; Homestead’s solid, but based on the way we played over the summer, we know we’re much better than them,” Liu said. “I’d definitely say that was one of our worst games, just because the season started, so everyone’s getting back into it.”

Throughout the game, there were a number of turnovers and miscommunications on both sides of the court, and both teams missed easy shots.

“We need to execute on offense,” Liu said. “We have a lot of plays, but we need to have a leader to call out the plays and ensure they’re run through.”

Despite not playing their best early on, the Falcons started clicking in the third quarter. Senior small forward Som Teymouri and Li led the team in scoring, with 20 points and 15 points, respectively.

Li made several 3-pointers during a close stretch of the game, pushing their lead to eight points. Coupled with the Falcon’s fast-paced, full-court defense, the team held off Homestead.

“In the second half our defense turned up, and a lot of steals and transition gave us a solid lead that we kept until the end of the game” Li said. “It was definitely key to see that our defense could keep us in the game since it’s our biggest threat this year.”

Homestead’s team was significantly taller than the Falcons, which contributed to the tough match. With several players standing well over six feet, the Mustangs were able to pull down a number of offensive rebounds for quick putbacks.

Despite this, the Falcons excelled on defense. Their fast-paced full-court defense placed constant pressure on the Mustangs, and opened multiple opportunities for fastbreaks and easy layups. According to Liu, teams are “scared of the Falcon’s full court press.”

“Our stamina on defense started with the offseason because all of us got gym memberships,” Liu said. “In practice too, we’re just constantly running without that many breaks.”

Liu added that the team hopes to win more dominantly in the near future, and is looking to win League Championships and CCS Championships.

“This won’t affect our season much because once our shots start falling, everything will fall in place which will lead us to our goal of winning CCS,” Li said.