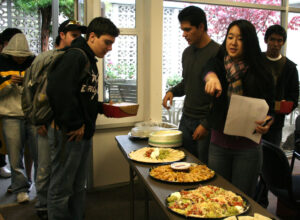 The leadership class hosts a catered lunch on Dec. 19.

With so many students stepping up as leaders through their extracurricular and in their classrooms, it comes as no surprise that the administration has decided to harness some of this power to enact positive changes for the school by forming a leadership class.

When it was first conceived, the leadership class was supposed to be just that, a class that students sign up for with the rest of their schedule. But because many of the school’s leaders already have full schedules, there were few people who signed up to take leadership as a class period. The original idea was then changed to a group of 20 students handpicked by assistant principal Karen Hyde. The group meets twice a week during Monday tutorials and Thursday lunches to discuss projects different subgroups are working on.

“I felt that if somehow we could bring together recognized school leaders, things could get done,” said senior Paul Stavropolous, who originally advocated for the class. He presented the idea to Hyde and received resounding support from the administration. “[Originally,] we didn’t have a specific purpose or goal other than bettering the school community, but as this year has progressed, we have found ourselves taking on several tasks that will bring a new taste to the campus.”

So far, programs involving the welfare of the student body such as Challenge Day and SafeRide have been initiated. The class also organized this year’s annual Second Harvest Food Drive and a catered lunch from Chevy’s and Red Robin for students today.

Fifteen percent of the money paid will go to the school. The food was previously ordered; each student who wanted some had to fill out a form and turn it in to the office. The menu includes burgers with fries, quesadillas, flautas and tacos.

“We are bringing food in to connect people and foster holiday spirit,” said senior Rishi Taggarsi, a member of the leadership class.

Since the food needs to be delivered quickly, the campus is closed so there will be no traffic in the parking lot, according to Hyde.

For many freshmen and sophomores, this is their first chance to buy food from somewhere other than the cafeteria.

“I think it’s really great that they’re bringing food from off-campus that’s different from the food that’s in the cafeteria every day,” said freshman Vivien Lu. “It’s also at a good price.”

Yet for some upperclassmen, the closed campus seems unfair. Some believed that it shouldn’t be mandatory for students to stay on-campus. Others said they don’t mind staying on-campus for one day.

“I like it better because I don’t have to worry about getting back to school on time and I can get tasty food that I normally wouldn’t be able to get,” said senior Lewis Chen.

In conjunction with Los Gatos, the leadership class is working on hosting a Challenge Day at Saratoga on March 17 to foster acceptance within the school community.

“Challenge Day provides youth with experiential workshops that demonstrate the possibility of love and connection through the celebration of diversity, truth and full expression,” said Hyde. “The program is created to build connection and empathy, and to fulfill our vision that every child lives in a world where they feel safe, loved and celebrated.”

Positive experiences with a Challenge Day held in 2006 convinced the administration to support its recurrence.

“It had a huge impact on a lot of people,” said Hyde.

Another project the leadership class has been working on is the SafeRide program.

SafeRide is a program that will offer students an alternative to driving home drunk or getting in the car with drunk drivers. Instead, Saratoga High students can confidentially call a school-sponsored number for a ride home. Volunteers from the Saratoga student body will wait in the Small Gym for a call, at which point a team of two volunteers, a boy and a girl, will pick up the intoxicated student and take them home.

Saratoga had a program like this in place about four years ago, but it was discontinued due to problems with insurance. Now, insurance is proving, once again, to be the main problem with getting SafeRide restarted. Companies feel it is very risky to insure students driving other students.

In addition to the insurance complications, SafeRide is still looking for parent volunteers to watch over the students while they wait in the Small Gym for calls. As of now, the project has about 15-20 student volunteers. Despite the difficulties, the leadership class is hoping the program will be up and running by the first week of second semester. If successful, rides will be offered on Friday and Saturday from 11 p.m.-2 a.m.