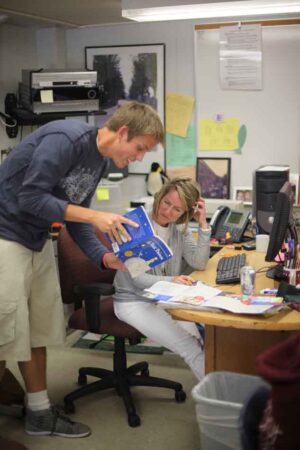 The challenge is keeping the class interested, because as every high schooler knows, boring lectures may help students catch up on their sleep, but don’t necessarily promote learning.

Every year, Bergkamp’s French 4 Honors classes read “Le Petit Prince,” a children’s novel that addresses important issues regarding life and human nature, and complete various group projects to “hopefully create interest in the book.” The activities—practicing vocabulary through crossword puzzles or even yoga, presenting puppet shows and skits, drawing posters that analyze the characters and sharing favorite quotes or events from the book—not only make the class more enjoyable, but they also emphasize conversational skills, especially necessary in a foreign language class.

“I love using projects for this book [because] my students are so creative and talented,” said Bergkamp. “They always amaze me with what they can do with an assignment. I think they have had fun with some of these activities and it has helped them to really learn the material.”

Senior Mara Couch agrees, saying the projects are an effective use of time because they obligate the students to become actively involved in their own education.

“Being forced to teach the other students the material really helped me internalize it,” said Couch. “I still remember everything I have learned from [“Le Petit Prince”] since January, but I don’t think I would if we had just read from the textbook or taken notes.”

Couch’s words relate a view that is held by many other students as well. While lectures and notes are valuable, a good education requires more. Students must be able to put their newly acquired talents to a practical use that will make the transition to the outside world easier and establish a stronger foundation for success.

Couch said Bergkamp’s methods provided her and her classmates with the opportunity to express themselves and prepare for real-life scenarios in the future.

“[Bergkamp] allows for a lot of creative freedom so it was a lot of fun,” said Couch, “but more importantly, she really encouraged us to think outside the box. Later in life I am sure we will all face situations where we have to come up with new solutions to problems, and that’s where projects like this will really help us.”

Bergkamp, however, gives the credit for her success to her students.

“It feels great to know that students enjoy being in class and appreciate when a teacher tries something new,” she said. “Not every project turns out the way a teacher hopes it will, but when an idea does succeed it feels good. I feel lucky to have the students that I have. Any idea that I might have for an interesting project wouldn’t amount to much without amazing students!”