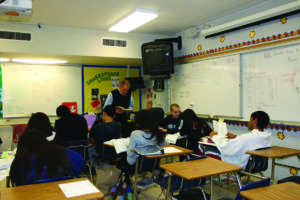 Poetry students read up on literature during class.

On a recent Monday afternoon, sophomore Benji Laus slung his backpack over his shoulder and headed to CAD (Computer Assisted Drafting), which is one of his favorite classes. Unfortunately for Laus, he won’t be attending CAD next year, as it is one of the handful of classes that will not be offered next year.

The cutting of electives such as poetry and CAD results from the classes not receiving enough sign-ups.

Assistant principal Brian Safine said the cutting of these classes was not a direct result of the district’s budget difficulties.

“Next year, as with all other years before, classes will be based on student sign-ups,” said Safine. “So if there [are] enough students that sign up we can run classes; if there aren’t, we can’t.”

The impending loss of Creative Writing Poetry, which has been treasured by staff and students alike since it was first offered in 1999, is especially devastating to those involved in the program. Current poetry students were shocked when it was recently announced in class that the course would no longer be offered.

“The whole class was silent,” said sophomore Darisha Jhutty. “We were so upset, but I kind of knew it was coming.”

There were only 14 sign-ups for poetry, which is not enough to run the class.

Safine said the class size for poetry was in the 20s in previous years, and the district could not run a class with as few as 14.

Even so, there have not been enough sign-ups to continue the class that has won numerous local and national awards over the years.

Students like Jhutty who have signed up for poetry will have to go with Plan B regarding their electives choice.

Peck will not return to teach for the rest of this school year but plans return next year to teach regular English classes.

As for the remainder of the year for poetry, Sutton will still be involved along with a long-term substitute for the rest of the year, said Safine.

Even though the classes being cut do not attract a lot of attention from the majority of the school, students such as Laus believe that the cuts were not necessary.

“CAD does not seem like the most reasonable class to cut because there is only one period every other day, and even if there are not a lot of applicants, it’s not a very expensive class to fund, so there’s not much reasoning behind cutting it,” said Laus.

Also resulting in a smaller class choice for next year is the decision to not offer a few new electives that were going to be available next year, said Safine. Among these are Engineering and Fitness and Food, which, according to Safine, did not have enough sign-ups to support their addition to the course offerings.

Students who have signed up for these classes will be placed in their alternate choices, Safine said.
“There should be plenty of room,” said Safine. “As of now we would anticipate these students moving directly to their alternate course.”

Regardless of the fact that poetry or CAD will not be offered next year, many students currently taking those classes this have positive feelings about next year.

“Some of our favorite classes may not be here next year, but [at SHS], there’s so many electives available that students will always be able to find a class they like,” said Laus.