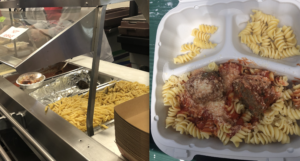 Photo by Andrew Lin
The meatballs have a texture similar to rubber erasers, which is concerning. Notice the lack of green vegetables.

Permalink
I can’t bring my own lunch from home, so this is what I endure

Students who regularly buy hot lunch might have noticed a change in early April. I arrived at the lunch line to see cafeteria workers assembling an unfamiliar array of meats, sauces, grains and vegetables in plain view of the students, as opposed to the many foil bowls with plastic lids of pre-packed, soggy and greasy meals that characterized past cafeteria offerings. I inferred that this was to make the ingredients look more trustworthy.

In addition to the standard pepperoni and cheese, there were pizzas with buffalo chicken toppings — a welcome surprise after the chicken and bacon pizzas were so cruelly taken from us last semester.

Before I start mercilessly criticizing the school hot lunch, I would like to establish that I have a lot of respect for the cafeteria staff. I understand that it is very difficult to supply meals to hundreds of hungry teenagers five days a week and not lose money while doing so. However, I believe with some changes to the menu, the school could serve better-tasting, healthier food at a lower price.

So far, I have had the honor of tasting the new chicken pasta bake and buffalo chicken pizza. Although I can discern an attempt to appeal to our long-suffering taste buds, as someone who has 15 years of eating experience, I can confidently say that much of this food still falls below my standards.

My first impression of the chicken pasta bake was actually relatively positive: The pasta looked like pasta, the cheese sauce was thick but not chunky and a large piece of breaded chicken had been generously provided.

However, the first bite told a different story: The chicken tasted like a highly processed chunk of gristle and flesh. Part of me doubts this dry, grainy and off-putting chicken can even be sold at supermarkets. Despite all the ingredients of the pasta bake being stored separately, the breading on the chicken was both soggy and tasteless.

Don’t even get me started on the cheese sauce — it contributed absolutely no flavor to the bland pasta. Three small wilted florets of broccoli did not distract from the high amounts of fats and carbohydrates in the meal. Even bringing the fork to my mouth for another bite was a challenge.

In contrast, my first bite of the buffalo chicken pizza brought my taste buds back to life. The buffalo chicken was adequately spicy, the crust did not taste like flour-flavored drywall and the cheese was gooey and sharp. My one concern was the excessive salt and grease on the pizza; I had to wipe the oil off my hands every few seconds, and I could feel my blood pressure steadily increasing with each bite.

Other cafeteria classics were still being sold alongside these new additions. While the cold deli sandwiches were easier to consume compared to the greasy hot lunches, they were also generic and unappetizing.

Bacon cheeseburgers were also available, but do not let the name fool you: These creations were a far cry from the beloved fast food classic. I tried one and regretted it instantly. The buns were fused with the patty and stuck to the roof of my mouth, and the patty itself was lacking in every way, coated with a questionable amalgamation of cheese and mayo. The small amount of bacon was just the cherry on top of this disappointment.

My complaints would not be so venomous if not for the ludicrous prices of the food. A single slice of pizza is $3.50. As a point of reference, an entire large buffalo chicken pizza from Domino’s costs $15.99, and there are way more than 5 slices in a Domino’s pizza. News flash: If you do the math, the pizza is way overpriced. The costs of hot lunch options aside from pizza are even more ridiculous, charging up to $6.

Here’s my idea for improving cafeteria meals. Instead of covering ground chicken in soggy breading, serve less processed meat but do so basic seasonings such as salt and pepper. It would be a lot healthier and eliminate unnecessary, unhealthy carbs and fats. Vegetables are cheap and tasty, so give us more of those. Many of the meals don’t have vegetables at all, which is a glaring flaw. According to myplate.gov, teenagers 14-18 need at least 2.5 and up to 4 cups of vegetables every day. Finally, I would cut down on the cheese sauce, which lacks flavor but contains many calories. Before you ask me why I still buy hot lunches, the reason is that I bike to school and have limited backpack space, so I cannot pack my lunches and am forced to spend over $10 every day on two portions of hot lunch (one isn’t enough for a growing boy such as myself). I feel both excitement and fear for the free hot lunches starting next year, because if food this mediocre costs so much money, I don’t even want to imagine how bad the free lunches will taste next year. Hopefully, one day, I will be pleasantly surprised enough to change my harsh opinions.

In the meantime, I will try to enjoy the current hot lunches while the cafeteria is still serving them — for example, the cheeseburger and curly fries sold the day before spring break tasted quite good. And since I have no other choice, I might as well be optimistic.