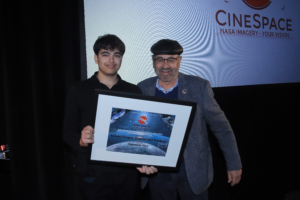 Permalink
Rohan Chopra has been making short films since age 9. He prepared over the summer for a NASA competition and won the Best Educational Award.

The first half of his 6-minute film, called “Journey to Mars,”  primarily focused on NASA’s past expeditions and progress in discoveries on Mars, while the second half looks into the future prospect of humans sending astronauts to the surface of Mars.

Chopra’s interest in filmmaking began at age 9 when he was attracted to the seemingly miraculous techniques and scenery in the films he watched. Since then, he has been thrilled to produce short films covering a variety of topics. Chopra’s family supported him, citing the process of making short films as a good way to express creativity.

“I like to create and share something that has a meaningful underlying message to inspire and entertain people,” Chopra said. “I want to express the creative side of myself through the language of filmmaking.”

He enjoys video as a medium so much that he has chosen to be in the Media Arts Program and also a member of the SHSTV staff.

But even with his love for it, the process of creating videos can be challenging and frustrating. Sometimes, there are difficult decisions he has to make concerning what information to put on the storyboard; other times, he has to deal with limited resources.

Reflecting on the work he put into his short film, he said that it was “painstaking putting everything together.” But it was all worth it and made him really proud in the end to see it come together.

The submission deadline of the CineSpace competition was this July, and the competition required participants to include at least 10% of the NASA archive imagery in their film. Out of the 169 film-studio and individual participants from 38 different countries around the world, only five awards were awarded: First Place, Second Place, Third Place, Film that Best Depicts Unity and Best Educational Film, the award Chopra won.

Chopra discovered the CineSpace competition through posters he saw when camping near a NASA facility in May. He was immediately interested and decided to participate, and he started his project in June.

“I looked at previous winners and finalists and noticed that no one had really done anything on Mars before, so I thought it was a cool topic that’d be unique,” Chopra said. “Since I was working by myself, I couldn’t really make an entire film, so instead I aimed it to be more of a documentary narrative.”

Along with browsing NASA’s imagery, Chopra also spent two to three hours a day over the summer to create original scripts and animations. Despite being stressed with the large amount of work the film required, Chopra never lowered his standards for it.

“I believe a film needs to be concise and entertaining while still being educational,” Chopra said. “It also needs to convey a message to the audience, which I tried to include a lot in mine, so I think my film met what NASA wanted to see.”

Chopra’s film won the “Best Education Film That Inspires the Next Generation to Join the STEM Workforce” in the special category out of 12 finalists, and he was invited to the NASA film event to meet collaborators, other filmmakers and astronauts. The finalists were given a private tour of NASA, and were able to observe rockets and converse with the staff.

“I would definitely participate in other competitions in the future,” Chopra said. “Both the process of producing a film and experience in seeing other brilliant creators’ work are priceless and unforgettable.”