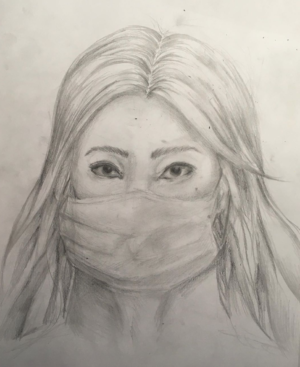 Junior Aileen Liao draws a picture of a woman in a mask and titles her Instagram caption “going to the supermarket or taking a walk outside, I sometimes see people outside wearing masks. It’s almost become synonymous with fear.”

On the morning of March 15, junior Aileen Liao quarantined at home and watched the news about COVID-19. She began sketching some symbols about her current life in a spur of the moment decision, and that was the start of her coronavirus sketching journey.

Liao first started drawing when she was two years old. After she moved to Saratoga in fourth grade after living in Germany for four years, Liao went to several art studios to learn different artistic styles. When she was approximately 5 or 6, she drew princesses, family members and animals, but around seventh grade, she took a break from art.

Liao missed art, but she was too stressed and didn’t have the time for it.

Then came the pandemic.

Feeling the urgency of the moment, Liao wanted to share her ideas, emotions and opinions. If possible, she wanted to give others something to relate to and think about.

Because several of Liao’s relatives live in Asia, she thought a lot about how COVID-19 affects her family and the implications in the U.S.

To share her art with her peers, Liao posts her drawings on her Instagram account, @aileeny_the_puffy_stub. But for Liao, the likes and comments on her posts are far from the most important part.

“While I appreciate the feedback and support, I am happy knowing that most of the people who follow me, whether they liked the post or not, have seen it,” Liao said. “They know about the issues, they know the message and they have a chance to think about it. I have a chance to influence people.”

Additionally, Liao considers art the perfect platform to express herself as it has “subtle messages” and stays in people’s minds for a long time.

“I didn’t want to just go back and sketch the same vases or whatnot,” Liao explained. “I wanted what I drew to have real applications and feelings.”

Liao added that she sketches frequently every day since they are short drawings, unlike her canvas paintings, which take her one or two months to create. She uses several mediums in her sketches such as pencil, water color, ink and marker, avoiding messier tools like pastels and charcoal.

Some examples of the art Liao has drawn include a barren city with beams of light connecting different windows. Liao said she wanted this piece to show  that “although we may appear disconnected on the outside, technology has allowed us to continue relationships and support each other.”

Junior Josephine Chou said she enjoys seeing Liao’s art on her Instagram feed because it highlights different aspects of COVID-19 and serves as a reminder to be kind to others.

Chou explained that she likes the emotions at play in Liao’s drawings. For instance, one of the first drawings Liao posted was about families' frustration when they were forced to stay together at home. It depicted cartoon-like characters yelling at each other.

“I think it really highlights what's happening right now,” Chou said. “We're in a place of uncertainty, and many are anxious, and it's tough to be kind to people in these times when you cannot foresee a bright future.”

Another drawing Chou enjoyed was called "Xenophobia,” drawing of several pairs of eyes, explaining the increased prejudice against Asians as they are being shamed for beginning this pandemic.

So far, Liao has posted 21 drawings on her account and hopes to continue drawing when life returns to normal (assuming that happens).

“I love art because it goes past language barriers,” Liao said. “My friends from Germany and relatives in Asia can mostly understand the pictures just as well as we do. It’s a perfect way for me to let out all my thoughts and opinions.”