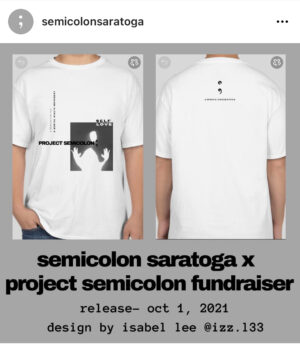 Semicolon Saratoga is scheduled to sell t-shirts designed by senior Isabel Lee in October to fundraise for Project Semicolon.

When junior Allison Tan posted her mental health story on her Instagram account on Nov. 2, 2020, she was met with a flood of supportive texts and messages. A year later, when Tan created @semicolonsaratoga, an Instagram account dedicated to posting mental health stories of anonymous Saratoga High students, she was met with the same heartwarming support.

“After I posted my own story on my Instagram, I started thinking about [starting the account] more. I thought, why not? I know why I do it, and if people don’t see it that way, that’s OK,” Tan said.

Students may anonymously submit content to be posted via a Google form in the account’s Instagram bio. Though most of the posted submissions are stories of mental health experiences, the account also welcomes other forms of art such as poetry that focus on the topic. So far, @semicolonsaratoga has posted 21 submissions.

One student detailed their struggles with body image in being skinny and underweight coupled with an invalidation of their mental health and body-shaming experiences. Another described their experience with depression, self harm and substance abuse, along with Redwood’s lousy job in providing students with mental health resources and support.

Tan captions each post with a heartfelt message of encouragement to the submitter.

She was inspired by Project Semicolon, a nonprofit organization dedicated to “building better lives for people all over the world faced with mental illness.” The semicolon symbolizes a point where an author, instead of cutting off their sentence, has chosen to continue on — an encouragement to those struggling with mental illness to actively push to continue on instead of cutting off their lives.

Tan also said she took inspiration from the Instagram account @metoo.losgatos, which is still up but now remains mostly inactive as the creator is a Class of 2021 LGHS graduate. The account was created in July 2020 and posted anonymous submissions accounting sexual assault and harassment at Los Gatos High while aiming to bring awareness to the rape culture at the school.

Soon after creating the account, Tan realized she would need support if complications involving a submission with possible legal implications were to arise. Thus, she added her two friends, juniors Elsa Blom and Jasmine Ispasiou, onto the Instagram account. Tan said she related to them and their personal mental health journeys, so she believed they would be a great fit to help run the account with her.

The account went public on July 7, 2021, and by the second to third day, @semicolonsaratoga received around “six to 10 responses.”

“I remember being so excited,” Tan said. “I was messaging Jasmine and Elsa in all caps, saying, ‘Oh my gosh, we have more responses!’ That made me so happy.”

The next day, they received even more. Along with the submissions came an outpouring of support and gratitude.

“I was just so happy that people were able to trust me because I know how difficult it is to share that kind of thing with someone, especially someone you barely know,” Tan recounted.

This overwhelmingly positive response was a bit surprising for Tan, who mentioned that her primary concern had been backlash from the student body for being too performative.

“I was always very scared that it might come off as performative or not helpful,” Tan said. “So having people tell me that it’s great that I started @semicolonsaratoga or that it really helped them feel less alone makes me feel a lot better. They make me feel like I started it for a good reason.”

According to Tan, while the wellness center and CASSY do a lot to help students, more time and focus needs to be spent on dismantling the “high pressure cooker academic culture” at SHS.

Ispasiou shares a similar view and believes that the highly academic culture of the school pushes too many students beyond healthy limits.

“At the end of the day, what matters most is your ability to get up each day and function — whether that be just waking up and going back to sleep, brushing your teeth or doing your homework,” Ispasiou said. “Mental health is kind of joked about, like ‘I’m going to kill myself because I stayed up late doing this assignment, I pulled an all-nighter, like, oh my god, I’m going to die.’ I think it’s just so stupid.”

Ispasiou has submitted to @semicolonsaratoga twice; both times, he received heartfelt comments.

“Not everyone is going to be comfortable with sharing their story, even anonymously with the vaguest bits of detail,” he said. “If there’s someone out there who is comfortable enough to share, [@semicolonsaratoga] can help.”