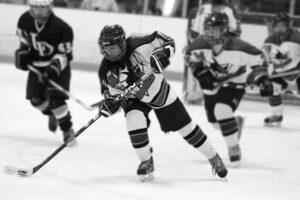 It was like any other day at ice hockey practice, executing drills and scrimmaging with teammates, when freshman Jaycie Luo noticed her dad talking with men in red and yellow warm-up suits. Shortly after, she found out that the Chinese Olympic Team had offered to allow her to practice with them and possibly later get recruited depending on her performance.

“I had no idea that I would join the China team until they showed up at practice and talked to me about it. I was so surprised and happy when they did though,” said Luo.

Luo’s dad first started talking to the manager of the China team on Sept. 12, and then they began talking about Luo and possible recruitment. Her parents want her to connect to and be more immersed in her Chinese culture since she was born in the U.S. Luo may go to China this summer to practice with the team and possibly join their practices when they are in the United States. If she performs well, Luo will get recruited and play in the 2014 Winter Olympics.

Luo has been playing ice hockey for nine years. She attends practices at the Logitech Ice Rink three to four times a week for 1 1/2 to 3 hours . She is currently part of the San Jose Junior Sharks Team in the 14-year-old group.

“I’m pretty serious about [hockey],” said Luo. “When I grow up, I still want to be involved with hockey and inspire others.”

Ice hockey has played a positive role in Luo’s life. It has not only allowed her to meet new friends, but has also strengthened her mentally.

“It has made me a stronger minded person and it motivates me to always do my best and to fulfill all my dreams,” said Luo.

Luo’s interest in ice hockey first started when she was 5.

“I hated figure skating,” said Luo. “I saw another girl play hockey and I decided to give it a try. I think its challenging, which makes it more fun and exciting having to cooperate with your teammates.”

Luo said that her parents and her coach were the biggest motivators and contributors to her development as a player.

“My parents always told me to work hard and always took me to practices and games. My coach helps me improve on my skills, too,” said Luo. “They’re always cheering me on.”

Of course, Luo’s parents are extremely proud of their daughter.

“Jaycie loves hockey and it is part of her life,” said Zhen Zhen Li, Luo’s mother. “She has grown up with it and I am so proud of her.”