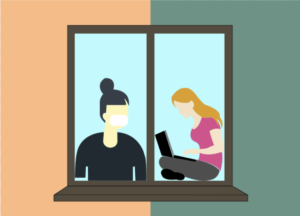 At the beginning of the school year, senior Grace Wang sat at her desk while working on a worksheet for her AP Government and Economics class. The silence from the Zoom class on her computer matched the quiet atmosphere of her room as she wrote away. Unlike when she has to complete collaborative assignments at school, Wang noticed how comfortably and quickly moved through the questions.

As she worked, Wang found herself grateful for the solitude of distance learning.

In an interview with the Pittsburgh Post-Gazette, clinical psychologist Robin S. Rosenberg stated that 68 percent of people have both some extroverted and some introverted tendencies.

For Wang, the transition to online school was easier than it was for extroverts, as it removed some of the more tiring and unliked parts of their day, such as physically going to school.

“Quarantine has made me realize how much of the fatigue of school comes from commuting and being in a social environment,” Wang said. “There is always some level of pressure to live up to expectations, even if you aren’t immediately aware of it.”

Since introverts often feel drained from social engagements, it is not surprising that adapting to their new social lives in quarantine has not been too difficult.

According to a study by Harvard Health, introverts enjoy being alone and focus more on their inner thoughts and feelings than their interactions with others. Because of this, introverted people often need to spend time alone to recharge.

Wang is more comfortable with staying home instead of going out often.

“I don’t miss going outside as much as having the option of going outside,” Wang said. “It’s more so the lack of having that choice rather than actually engaging in it.”

Wang added her pre-pandemic lifestyle was already quite secluded, so the shelter in place hasn’t dramatically upset her life.

“My family has always had a pretty strict hold on what I do with after school hours, so quarantine is just that over extended amounts of time,” Wang said. “I’m lucky that that doesn’t clash too much with my personality.”

The shift to doing classes online while staying at home could also appeal more to introverted students because they are going through the school day by themselves.

A 2013 study by Procedia Social and Behavioral Sciences found that introverts prefer learning in an online format while extroverts would rather learn in an in-person format. To introverts, asynchronous communications are “less threatening” than face-to-face communications because talking online offers more time for reflection.

Wang noted that hosting classes on Zoom helps her as she feels more comfortable speaking behind a mic or working by herself.

“I can see it as a sort of keyboard courage,” Wang said. “Any potential flaws with your statements are attributed to an icon on a screen rather than an actual person.”

Wang still feels a little uncomfortable and reluctant to participate verbally in classes, but the Zoom chat feature helps her become more involved in class.

She said that it was easier to participate in the chat since writing and reading the messages is a lot less personal than speaking.

Some extroverts, on the other hand, are finding the continuing quarantine to be difficult.

According to Harvard Health, rather than losing energy in social situations like introverts do, extroverts gain energy from socializing.

Sarkar, an extrovert, said she feels isolated from her friends since she spends most of her time alone at her house. She feels that virtual learning doesn’t allow for the same interactions she had with her friends and classmates in person.

“I think the school district has tried its best to make it as close to regular school as possible, but it’s really not the same thing at all,” Sarkar said. “Most people don’t feel like talking, and some don’t show their faces, so it feels less like a community.”

Bray has also struggled to cope with the isolation. To combat his loneliness and sadness, he said he has begun going on long drives in the hills or to the beach. He also calls his friends via FaceTime or Houseparty to see them — albeit virtually — and find a sense of normalcy.

Even through these apps, Bray still misses aspects of in-person learning that cannot be replicated.

“I really miss the little interactions I used to have with people that I wasn’t really friends with,” Bray said. “I would talk to them in the hallways before school and in my classes, and I obviously can’t do that anymore with Zoom.”

Despite his best efforts to maintain interaction, Bray said his daily routines have been greatly interrupted in recent months. Before the pandemic, he thrived from going to school and hanging out with his friends. Still, Bray said he has adjusted to a virtual social life fairly well and finds motivation in staying indoors by remembering that quarantine is important for public health.

Wang said she understands that quarantine can be more difficult to manage for extroverts. Still, she said that this situation revealed her self-reliance and believes that traits like this are something both introverts and extroverts can develop.

“I believe there are traits to both extroversion and introversion that are important,” Wang said. “Some good self-reflection for people who don’t have the time or tendency to be introspective may be healthy, and independence is a good thing to develop."