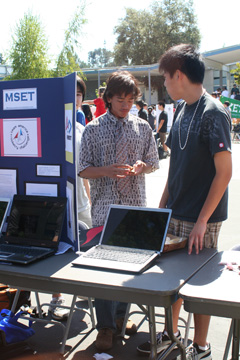 The interest in forming new clubs has increased dramatically since the beginning of the year. As a result, the ASB plans to be more critical in evaluating the qualifications each club must meet.

This year, an ASB member will personally visit each club during a meeting.

The interest in forming new clubs has increased dramatically since the beginning of the year. As a result, the ASB plans to be more critical in evaluating the qualifications each club must meet.

This year, an ASB member will personally visit each club during a meeting.

“We are going to divide up the clubs among ASB members,” said assistant principal Karen Hyde. “We will make sure that when they say they meet, they meet, that they have enough [members], that there is a purpose in their meeting, and that the purpose is legitimate.”

Each club requires a club adviser. The adviser must supervise the club, know what is happening and be willing and available to travel to any activities, events or trips with the students. They must be willing to do more than just allow students to meet in their classroom, Hyde said.

“We need to have advisers who actually act as advisers,” said Hyde. “The difference really is that they aren’t just going to open their doors and let kids come in. They should know what is going on with the club and support it.”

Another requirement is that each club must have at least 20 members throughout the year.

“I’m not particularly worried about the requirements,” said sophomore Akash Kaand, who is president of the Youth Engaged in Advancing Health club. “My club already has over 25 genuine members, an adviser that is actually involved and we meet regularly.”

The minimum number of members, however, may be the deciding factor for many clubs since students may become busier as the school year progresses, and clubs typically start to lose members as a result.

“The only reasons we will ever cut a club is if member interest is low or if the club is being downright unproductive,” said head club commissioner Ameeka Shenoy.

About 10 new clubs were approved between the beginning of school and club day, which brings the total number of clubs up to 59. Despite this, there were also a couple of clubs that were not passed.

“One student came to me asking to start a Quidditch club, but unfortunately our insurance won’t cover [her idea]. It was a heartbreak to say no,” said Hyde. “The good news and bad news is that for the first time I saw kids voting no on clubs at student council last Monday night.” Quidditch would have involved kids playing dodge ball.

Shenoy feels that those who wish to start a new club should be dedicated and ready to put effort into making their club the best that it could be.

“It’s one thing to form a club because you have an interest in the cause you are working toward,” said Shenoy, “but it’s another thing to be proactive and make your club’s existence stand out in a positive light through diverse activities and creativity.”