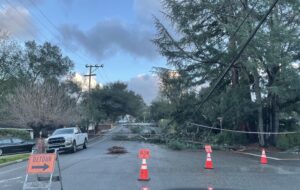 Photo by Saachi Jain
A tree fell down on Herriman Avenue, taking down a power line and blocking the road.

Permalink
Flooded rivers and fallen debris caused power outages and forced many residents throughout the state to evacuate.

The first week of second semester saw violent rain and wind from intense storms leave countless community members without power, teachers stranded at home and unable to commute to school, and both schools in the district closing due to a prolonged power outage. Over 66,000 PG&E customers in California were sporadically without power in the few days after Jan. 5, including Saratoga High, which canceled school on Jan. 10 as a result of a 21-hour power outage.

In Los Gatos, power was out for three school days, and students from Los Gatos High began to come over to Saratoga to use the gymnasium for sports practice, charge their laptops, and do schoolwork in a lit environment.

Despite school only being canceled in Saratoga for one day, many teachers found themselves scrambling to communicate a plan with their students, having missed half of a Red-Blue day rotation.

To make up for the lost day, teachers took many approaches to make up missed time.

“I sent out a message to all my Blue Day kids, giving them all of the material that the Red Day students learned on Monday,” Chemistry Honors teacher Kathy Nakamatsu said. “We’re now playing catch up, and probably will be for a couple of weeks.”

Since a few students were still without power after coming back to school, some teachers had to incorporate parts of missed classwork into the future lessons so those students wouldn’t be confused when learning new material.

“I was able to do a bit of work before my Wi-Fi went out, but eventually I couldn’t do anything,” said sophomore Annette Li, one of the students affected by the power outage. “My work started to pile up from other classes, but some teachers have been understanding and allowed some assignments to pass.”

Even after the power came back the next day for Saratoga High, there was visible damage on Saratoga roads. Along Herriman Avenue, a tree fell down with two power lines, forcing cars to take a detour and causing the power outage to last longer around that area. The damages caused by the storm will take weeks to fix due to the amount of debris and water gathered in the roads, according to an article by the Times.

Some staff members, such as art and Media Arts teacher Joel Tarbox and APCS teacher Brandon Petersen were unable to come to school for several days after the power outage due to closed roads and loss of power in their homes. Petersen missed three days of school, due to his power being out for 230 hours starting on Jan. 8.

“This is the worst storm I’ve seen since the ‘90s,” said English teacher Megan Laws, who grew up in the Santa Cruz Mountains. “El Niño caused bad flooding then and the ‘80s storm before that resulted in mudslides in the Santa Cruz area.”

Historically, all counties in California have experienced at least one significant flood in the past 25 years, which has resulted in billions in damages.

In the mountains north of Santa Cruz, floodwaters reached chest-high levels while the Carmel River rose to almost 13 feet at Robles del Rio on Jan. 9. Muddy waters pushed cars, stop signs, trees and propane tanks into the streets, even reaching Soquel where the parking lot of a shop was flooded with three feet of water. Highways were also shut down for hours, including Highway 101, Southbound Highway 17 and Highway 9 due to the flooding and landslides.

Despite all the damage on the roads, there have been certain benefits from the heavy rain. Reservoir levels are rising quickly now, with Lake Oroville rising from 28% of total capacity to 47% in less than a week. The storms also produced a ton of rain on top of snow in areas like the San Bernardino Mountains, which have acted as sponges to keep the rainwater up in the mountains. California’s mountain snow now holds twice as much water content compared to previous years, further increasing California’s water supply once the snow melts.

For a drought-ridden state like California, this rainfall has downgraded drought conditions in Fresno and the Central Valley, moving from extreme drought to severe drought. Select areas such as the Bay Area have even moved from severe to moderate. While the recent rain won’t be enough to fully recharge the water table in the soil, it has helped relieve some problems with reservoir storage and improved the groundwater situation.

“It has been a while since I’ve experienced such a prolonged power outage,” said sophomore Sarah Lim, whose power was out for 16 hours. “We definitely needed some water, and it was nice to unplug for a day.”