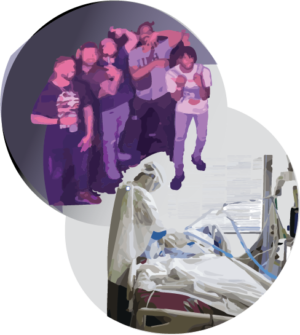 Although LA coronavirus cases have been severely rising the past few months, TikTok stars have still been hosting parties without social distancing or masks, resulting in criticism from citizens, other celebrities and the mayor.

With Los Angeles county having close to 240,000 COVID-19 cases and 5,759 deaths as of Aug. 30, the city is not the place to hold large gatherings with no social distancing or masks. But many influencers have still been publicly partying and disregarding state social distancing requirements.

Most of these influencers, who gained their fame from making 15- to 60-second videos on TikTok, moved to LA and started content houses with other popular stars. Two of the most famous content houses are the Hype House and the Sway House, composed of tens of popular content creators in each house who film TikToks and YouTube videos together.

Controversy over partying started when the Hype House hosted a birthday party for one of its members, Larri Merritt, better known as Larray, on July 21. From videos posted on social media, it was clear that no one in this Hollywood Hills mansion was wearing masks or remotely attempting to socially distance.

In a Hollywood Fix interview with Hype House founder Thomas Petrou, he said 60 to 70 people attended the party, with hundreds more at the door trying to get in. Those who did attend were all influential stars including TikTokers Charli and Dixie D’amelio and YouTubers James Charles, Emma Chamberlain and Tana Mongeau.

Petrou admitted in an interview with The New York Times that these parties weren’t just for fun — they were for work. He went on to say that the job of influencers is to entertain people, and that “they couldn’t put their entire lives on hold for a year and not make any money.”

This party was not the last of the many parties that influencers have been hosting during this pandemic.

Among these influencers is TikTok star Bryce Hall, who recently turned 21 on Aug. 14. Hall and his friends organized a party with over 100 attendees, including many other popular creators on the app such as Avani Gregg, Mads Lewis, Quinton Griggs and others.

Many of these influencers do not see what is wrong with hosting parties. When a paparazzi asked TikTok star Cynthia Parker about the party, she brushed it off saying, “It’s his 21st,” while TikTokker Madi Monroe said she couldn’t speak on the situation since she also had a party planned to celebrate her reaching 10 million followers on TikTok.

Despite this, many influencers believe they are just handling the mental health effects of the pandemic differently from others.

TikTok star Hootie Hurley stated in a New York Times interview that in a time of social isolation, many people are depressed, and no one tells them how to handle it. According to Hurley, people manage social isolation in different ways.

“Some people crawl in a hole and isolate themselves, some people party,” Hurley said.

Still, there are also some influencers who understand the danger that these party-goers are posing to themselves and everyone around them.

YouTuber Tyler Oakley tweeted to various TikTokers and asked them to consider wearing masks, abide by social distancing and encourage responsible behavior. Comedian and rapper Elijah Daniels, who has also been very active on Twitter, voiced his concern and frustration at the partying influencers, saying that he had spoken to the LA mayor and was unsure of what would happen to them next.

So what do teens think of this behavior?

Senior Sumhitha Malladi said the influencers’ partying reveals the type of people they are.

“They already live with over 20 people and are famous and influential,” Malladi said. “All they have to do is go on a livestream and play pattycake and their audience will be happy. They don’t have to go to parties and promote underage drinking, not wearing masks and not social distancing.”

Ultimately, the situation became so drastic that Los Angeles mayor Eric Garcetti stepped in. He published a statement saying that despite numerous warnings, the Sway House, which includes Hall, continued to party. Garcetti said that he disconnected utilities at the Sway House in order to stop the parties that “endanger our community.”

"If you have a combined 19 million followers on TikTok in the middle of a public health crisis, you should be modeling great behavior,” city attorney Mike Feuer said in a press conference.

Feuer reiterates that the Sway House was given many chances. On Aug. 8, they were issued a citation warning, and six days later, the boys hosted a party for Hall’s birthday. Garcetti shut down the power on Aug. 19.

As of Aug. 28, Hall and fellow Sway member Blake Gray have been charged with misdemeanors for holding two large parties during the ongoing pandemic. It is not clear yet if Hall and Blake will be facing any jail time or consequences.

Sadly, these influencers are not the only large group of people that have been ignoring social distancing guidelines as they continue to gather and party in large groups. Whether fully virtual or in a hybrid model, many colleges have brought back groups of students to live on-campus for the fall. Almost expected, some college students have ignored these rules and continued to party.

According to unc.edu, within a week of bringing students back, the University of North Carolina at Chapel Hill switched to completely remote learning and planned to reduce its residential hall capacities. This decision followed 177 students going into isolation and 349 students going into quarantine in the first week of school (Aug. 10-16).

These positive cases can be attributed to students partying, holding slip’n’slides, and clearly not following either CDC’s social distancing guidelines or university rules.

Unfortunately, UNC is not the only college to be dealing with this issue, with many Southern schools like the University of Georgia and the University of Alabama seeing severe spikes in the number of their cases.

While there might not be a direct correlation between these students partying and influencers’ partying, it is fair to say that by partying, influencers are upholding the mindset of “it probably won’t affect me, and I can’t not see my friends and live my life for so long.” This mindset, which is not only dangerous and extremely disrespectful to the hundreds of thousands of lives which were taken from this virus, has clearly spread to young adults all over the country who now believe it is okay to go to massive gatherings.

For college students, it is best to threaten disciplinary action and immediately send students home if they are found disobeying social distancing guidelines. Governments should impose heavy fines on those found not obeying these guidelines, and both parties should implement a tip hotline where they can find out where partying is happening.

Ideally, such restrictions will hinder many young adults from going out, partying and risking their own lives as well as lives around them.

“You might not want to put your life on hold for a year,” Malladi said. “But the pandemic isn’t going to put itself on hold for your 21st birthday.”