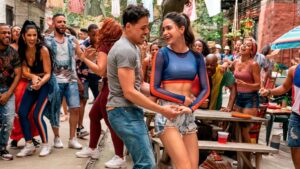 Photo by CNN
Vanessa and Usnavi dance and sing in “In the Heights” hit number “Carnaval del Barrio.”

As I opened the doors to enter AMC Saratoga for the first time in June, inhaling the scents of buttery popcorn and cheesy nachos, I couldn’t have felt happier to be back and ready to watch “In the Heights” after reading several promising reviews. As I exited the theater, I had to conclude it didn’t live up to the hype — though it was a good movie.

Usnavi, played by actor Anthony Ramos, owns a local corner store and runs the struggling business with his cousin, Sonny, played by Gregory Diaz IV. Though Usnavi feels a special connection to Washington Heights’ lively energy, camaraderie and people, he longs to return to the Dominican Republic, where he grew up. The story also follows Usnavi’s complicated love affair with Vanessa (played by Melissa Barrera), who hopes to become a fashion designer and move downtown.

Additionally, Usnavi’s friend Nina is a “genius” who has just finished her first year at Stanford University, where she feels like she doesn’t fit in. She faces the pressure of succeeding in college as she represents the “suenos,” or dreams, of her neighborhood.

The film blends generational conflict (Nina, a first-generation college student struggles with Abuela Claudia, the Washington Heights “grandmother,” who left Cuba and embraced uncertainty when she was young), cultural confusion, multiple love stories and the Development, Relief and Education for Alien Minors Act (DREAM Act), which Sonny explores as an undocumented immigrant as he attempts to become eligible for U.S. citizenship. The musical numbers are breathtaking, mixing rap, hip-hop, Latin pop, salsa and several other styles.

One of my favorite scenes occurs when they break out in a swimming pool number “96,000,” which highlights different characters rapping or singing about what they would do if they won the lottery. Usnavi and Sonny take turns singing and rapping in several verses while swimmers break into their choreographed routines in the water. It was a treat to watch the perfectly synchronized movements and amazing cinematography in the local public pool of Washington Heights and highlighted the setting’s tight-knit sense of community.

Additionally, when Abuela Claudia sings her solo “Paciencia y Fe,” I was in awe. The song touched on her experience and problems in Cuba and how moving to New York changed her life forever. Miranda’s lyrics beautifully capture her obstacles, struggles and the sacrifices she went through as a young Latina.

Though “In the Heights” comes to life in the theater, its 2-hour runtime wore me down the further it dragged on. The film is told in a series of vignettes that reveal different characters’ experiences, leading to an incohesive plot. The swirl of plot threads, tones, themes and experiences all feel like pieces of an incomplete puzzle, where most characters are left underdeveloped.

What’s more, the conflicts and questions that the film aims to resolve are predictable. Usnavi finds the courage to ask Vanessa out, Nina goes back to Stanford after finding her belonging and Usnavi helps Sonny gain citizenship. And though the film clearly emphasizes the takeaway themes of family, hope and dreams, several scenes act as fillers, rather than adding to the storyline.

So, would I nominate it as an Academy Award for its screenplay? Unfortunately, not. But would I recommend watching this film for the “theater experience”? Most definitely.