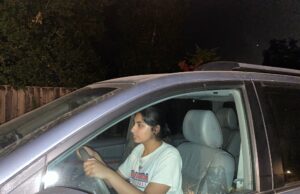 Photo by Kaasha Minocha
I practice driving for my behind-the-wheel test in my mini-van.

Driving through the bustling streets of downtown Los Angeles in August, I felt my anxiety climb to an all-time high. While visiting UCLA with my family, I was simultaneously practicing for my driving test at a DMV in Glendale shortly thereafter.

The trouble that day started when I approached an unprotected left turn on a narrow 2-way street. Not knowing how to gauge speed, I whipped around the corner at 20 miles per hour, leading me to almost crash the cars right near the curb.

But that wasn’t the worst of it.

I was at a red light along the traffic-heavy Wilshire Boulevard, with cars in front and behind me. Noticing that a freeway exit was coming up, I rushed to switch places with my mom — but as soon as I stepped out of the car,  I realized that I had left the car in drive mode. Though the car started moving, my reflexes saved me in time, and thankfully, I didn’t hit anything. Regardless, you probably don’t want to hear about how my mom screamed cuss words at me. Meanwhile, Kaaya, my twin sister, laughed at me in the backseat.

After going through this traumatic experience, I was pretty down, and expected the worst when I went in to take my driving test in Glendale.

I cannot begin to explain how unprepared I was. I had only practiced for 10 hours total, mostly consisting of a few driving lessons I had completed and a few short drives on the empty streets around my neighborhood.

I was angry at my parents for forcing both my sister and me to take the test in Los Angeles, on totally unfamiliar roads, especially when I clearly hadn’t had enough practice. Nevertheless, I tried to stay optimistic. With the Glendale DMV’s reputation for generosity and an 86% pass rate, I would be fine, right?

Everything seemed to be going well — I changed lanes smoothly, and even managed to take the first few turns at a nice, slow speed. Then, however, came the section I was most nervous about reverse backing.

I pulled over to the side of the road and my examiner told me to reverse the car in a straight line. But I had never practiced this maneuver before. As I began reversing, the car gradually began turning into the middle of the street. Although my examiner granted me two more tries, I was ultimately unsuccessful.

Wincing, I watched her draw an X on my test sheet, knowing that I had failed. I drove back to the DMV defeated, upset that I hadn’t practiced this crucial skill.

To make matters worse, Kaaya passed, and I was forced to celebrate her victory amid my defeat.

But my frustration and anger only drove me to work harder. The very same day that I failed, I scheduled my next driving test, eager to practice as much as I could.

Seeing Kaaya drive me to school while wearing the “New Driver” shirt my mom bought her, I pushed myself to take every opportunity to drive and practice reverse backing.

Going into the test the second time, I felt confident. I had a gut feeling that I would pass this time, and had already spent time browsing online for wallets with clear slots for my license.

I was stunned. I thought I had done everything perfectly.

My driving examiner claimed that my reverse backing was “perfect,” and I merged lanes smoothly, but apparently, my jerky braking and inconsistent stopping distances added up to 18 errors. I needed 15 or fewer to pass.

At this point, I was furious. My mom and I tried to “fight it” by talking to both the examiner and DMV manager about how the marks were petty, but they wouldn’t budge — the examiner proudly claimed that some people fail seven times before passing.

Still, the failed test made me feel like a total failure. Why did I constantly have to be in the passenger seat?

When school started, I saw my peers driving to school, running errands and going off campus to grab lunch with friends. I felt jealous of not having this independence. I cringed and hated that my mom still had to pick me up from activities, without having the luxury of leaving and going places whenever I wanted to. It was this intense FOMO that prompted me to schedule my test for mid-October.

Though I face heavy pressure to not to fail for the third time, for fear of taking the written test again, I’m staying hopeful. Third time’s the charm, right?