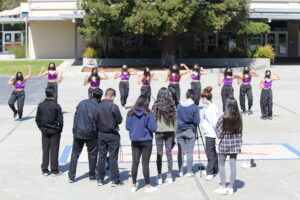 The Junior Girl’s Dance performs in front of the officers in the quad while Junior Olivia Kinoshita gets her filming equipment ready.

When sophomore Avani Gupta signed up to choreograph one of the sophomore girls’ dances for Bombay in the Bay (BnB), she was apprehensive about the performance given that they had to start practices and organize the performance entirely online.

However, when the grade was cleared to practice in person in recent weeks, their spirits were lifted and she was reminded of the fun and energy from previous years.

Now, the Indian Cultural Awareness Club (lCAC) has announced that all of the dancers’ efforts will be showcased as video clips at 8:30 p.m. on April 16 and 17 in a drive-in movie-style presentation in the school’s parking lot. The show features 125 performers from all four grades with different varieties of dances.

The show date was pushed back from its normal mid-February time slot to the current dates. The performance will last around 90 minutes. Tickets are selling for $40, and all proceeds will go to Deepshika, a non-profit that provides relief to underprivileged cancer patients and their families.

At 8 a.m.on March 31, tickets for the event were made available for the general public. Each ticket represents one car coming to the drive-in movie show, with as many people as the car can fit. Because of limited space this year, people are only allowed to buy one ticket for one show.

There are also strict guidelines for the show: Participants cannot sit on top of their cars, roll down windows, or step outside (except to walk to use the school’s restrooms). Refreshments will not be served.

According to ICAC officer Proby Shandilya, performers for most dances came to the school on the weekend of March 27-28 to practice and film in the quad or on the football field. The clips from each grade’s performance were shot by juniors Olivia Kinoshita and Sadaf Sobhani and edited by Kinoshita and junior Grace Hsu.

However, specialty dances like bhangra, classical, singing, AGD and AMD were allowed to film off-campus, giving them more creative freedom. ICAC is keeping the off-campus venue a secret until the screening as a surprise.

The result was not achieved without epic struggle, however. Shandilya said a big problem for BnB was that many participants dropped out in the middle of rehearsal due to the county’s one-cohort rule, which stated that any student could only be in one school-related extracurricular cohort at a time. For many students who were involved in either robotics or sports, this meant they had to drop out of the show.

Despite this, he said that the rule made “everyone who chose BnB exceptionally committed to their grade’s dance, which has shown in their performances.”

On the flip side, this lack of participation wasn’t reflected in the sophomore class. Surprisingly, the group had an increase in participation this year, which Gupta didn’t expect because she thought that people would opt out because of the cohort rule and the irregular performance and practices. She attributes this positive change to the fact that people had more free time to do and try different things.

She said the biggest obstacle this year was having two different casts rather than one, since choreographing and planning formations for smaller casts is always harder. Because of COVID-19, the rules stated that each grade needed to have two casts for their girls and boys dances if the casts exceeded 15 people.

As the state of COVID-19 in the county kept changing, ICAC officers and performers had to be flexible since many of the performance's logistics remained to be seen, said Gupta.

“Things like whether we had in person practices and how we were going to perform were all unknown [before the county went to red tier], but it ended up working out pretty smoothly,” Gupta said.

Despite all this, Gupta said that the grade is still having fun and bonding together. Her favorite memory from BnB this year is when the grade organized a game of “Fugitive” with all the other sophomore casts and each cast showed the other their dances.

“It was the first time it felt like last year’s BnB, and getting to see everyone in person, especially at night, was super fun and refreshing,” Gupta said.

Despite all the changes, the officers and performers remain hopeful that everyone who watches the show will feel the vibrance and fun of BnB, even in this abnormal year.

“Historically, one of the best things about Bombay in the Bay is how it brought the entire community together for a night of celebrating Indian culture while helping a worthy cause,” Shandilya said. “This year, we hope the show maintains that community atmosphere in a safe way.”