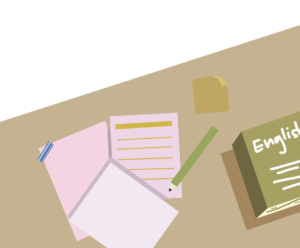 What you’ll need: lofi music and 20 different types of stationery.

With sophomore year in full swing, I decided I should find a more productive way to study than cramming 10 minutes before my exams. To improve my studying habits, I turned to the most reliable source of information: motivational vloggers on YouTube.

Specifically, I started looking into study vlogs, aesthetic videos that focus on academic activities and are usually accompanied by relaxing lofi beats. When I started looking for study videos, I was a little overwhelmed by the number of real-time study streams there were — I was genuinely confused why so many people wanted to stare at someone studying live while trying to study on their own. To figure out what all the fuss was about, I opted to watch one of the shorter ones that featured time lapses of the vlogger studying.

I was immediately drawn to a video titled “Get Productive With Me” by Carina Natalie, who started the video with a short introduction of how she usually spends her time studying, and gave some tips on how to study better, such as having apps on your phone to track your study time and taking short breaks every one or two hours and having a tidy workspace.

When it was time to take notes of my own and study, I immediately noticed four textbooks, numerous sheets of binder papers and all sorts of pens scattered all over my desk. Off to a great start.

After taking the time to clean up my workspace, I played some Studio Ghibli jazz lofi beats and took out the fancy Mildliner highlighters and colorful pens that I already owned. I was determined to write the title of my notes in calligraphy like the vlogger, but I soon found out how hard it was to make even a single word look decent — one slight shiver of my hand immediately turned a beautiful “Chapter” into a disgusting blob.

I set the paper aside with pain, not wanting to waste a perfectly fine page just for an unsatisfactory calligraphy attempt, but I also wanted to recreate the pretty notes that every vlogger seems to possess. My mom always told me I was a determined person, but this was the first time I had felt this determined to do anything — I was going to get a beautiful title on my notes and that was that.

After two more attempts at calligraphy, I settled on a decent looking title for my notes and started drawing lines and dots all over my paper in hopes of making it look doodle-y and cute. After that, I even created a color-coded system for highlighting with even more specific subcategories, like pink for important names of people or purple for notable places, all of which required me to always look back on my key in order to remember which color represents what. Instead of my normal hour of notes, I spent 2 hours of my life highlighting and switching between pens. Was it worth it? I have no idea.

Even though it was fun to make my notes look pretty, simply trying to make it look somewhat neat and recognizable with my handwriting took a lot of time away from me and I had less time to actually try to comprehend the lesson and my notes, which takes away the whole purpose of them. All the color coding and highlighting was fun to make look at, but I had to stop often in order to make my notes actually look good, which was pretty inefficient, but to be fair, it did provide me a nice break from the stress of schoolwork.

Although I would probably never be able to reach the YouTube video’s level of aesthetics and efficiency, I am confident to say that at the very least my notes are pleasing to look at.