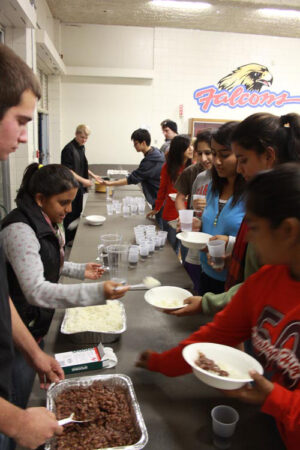 Every five seconds, a child dies from starvation and 9.7 million children die before they reach their fifth birthday. Fifty percent of the people in the world go to sleep hungry and 85 percent of the world live in low-income households.

These issues and facts were discussed during the Hunger Banquet that took place Nov. 10 in the cafeteria and was organized by the leadership class. The Hunger Banquet, a simulation to display the hardships of poverty, had a turnout of 50 very surprised students, who were originally told they were invited to a special charity dinner.

At first, everyone gathered into the cafeteria and was handed a piece of paper saying which social class they belonged to: high, middle or low income. Students were then handed food that represented the meal portions people actually receive in their income class. The high-income class received a full three-course meal complete with salad, pasta, dessert and cranberry juice; the middle class got a small bowl of rice and beans and a cup of water; and the low-income people received a handful of rice and a cup of water.

Students from each class moved up and down, showing the instability of each person’s place economically. At some point while everyone was eating, a few people from the upper class tried to transport their food to the poorer people, but it was all thrown away to show how corrupt governments often don’t give donated goods to the people who really need it. A video was then later shown that contained facts and pictures of poverty.

“Pictures are worth a thousand words and the pictures that were chosen definitely made everyone realize that hunger around the world is a problem, and we tend to brush it off and don’t really realize it,” said junior participant Arianna Paranzino. “But when you see pictures the problem becomes much more real because you see actual kids starving.”

Afterward, students discussed their feelings about the issue. The banquet ended on a high note with a raffle of gift baskets created by leadership students. The tickets sold at the raffle generated money that will go to Oxfam, an organization that works to end hunger around the world.

“The sharing was touching and impressive and the concept of the Hunger Banquet was extraordinary,” said assistant principal Karen Hyde.
Senior Natalie Tkalcevic was the head coordinator while the leadership class helped her with the planning.

“In leadership, we all broke off into groups of events that we were interested in. Seniors Madeline Rothenberg, Chris Renalds and Sarah Guy and juniors Leah Capek and Nina Mohanty all were huge helps in making this event possible. The rest of leadership helped a ton with setting up before the event and getting friends to come,” said Tkalcevic.

Planning for the banquet started at the beginning of the year but ultimately got going the week before the event due to other events such as homeoming and the 50th anniversary. The banquet was advertised as a charity dinner and there were specific students who were chosen to participate. Tkalcevic was pleased that information about the Hunger Banquet had not spread around school because she found it amazing to see the “shocked and surprised” faces once they viewed the video.

“I think the video definitely affected people especially after we showed the slideshow, which Leah Capek made. It was brilliantly put together and really got the kids thinking. The information we gave to the participants were so shocking; people really started to feel the importance of being there,” said Tkalcevic.

Hyde said that she was impressed that they were able to pull it off on a night before a holiday; however, a number of kids who RSVPd didn’t show up and she was slightly disappointed that those seats were not filled.

“I think the simulation as a whole was effective because it’s not every day where we’re put into a position where we have to see how distinct the differences between countries and classes,” said Paranzino.

Hyde is curious to see if another Hunger Banquet can happen next year without it being a “surprise” but yet still be as effective.