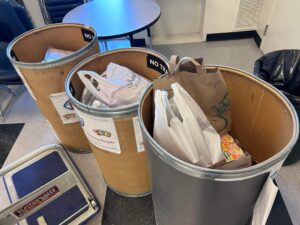 Photo by Sam Bai
The three gray bins placed around campus are filled with donated food.

From Nov. 16-21, the Hunger at Home club placed three gray bins in front of the music building, cafeteria and school entrance.

“Our club really focuses on food insecurity and trying to spread the word about it,” said junior Sam Bai, president of Hunger at Home.

At the end of the drive, the club loaded the donations into two SUVs. The SUVs then drove to the Hunger at Home nonprofit, which will distribute the canned foods at a drive-thru distribution for people in need. Even with the staggering number of donations, the club has a higher goal for future donations and student participation.

“This is the first large school event we have done. We hope that it gets our name out to as many people as possible so that more people know about the number of people who are going hungry everyday,” Bai said.

According to the club’s secretary, junior Paolo Wang, if people do not have leftover canned food, another way to contribute is by donating money to nonprofit organizations or charities. People can also buy canned food or help volunteer distributing food.

In the future, the Hunger for Home club hopes to hold webinars and speaker events to bring awareness to food insecurity. The Hunger at Home organization’s next distribution will occur on Christmas Eve from 9 to 11 a.m, and the club encourages people to volunteer at this event.

Club member Carine Chan said that the club and ASB also plan to have Hunger for Home cater for this year’s prom, but details are still being worked out and haven’t been finalized.

“Not only do they do food distribution to low-income communities, but they also do a catering service in which they train chefs and provide them with a job,” Chan said. “I think it’s a really good opportunity to pick up a good cause.”