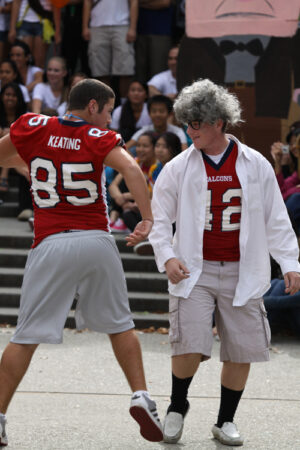 Kyle Keating and Bryce Dozier dance it up during senior quad day on Nov. 6.

The 2009 Homecoming week will certainly be one remembered for changes, as it came to a close with a senior quad day, a football game and an unusually clean dance in the gym the following night, Nov. 7.

The 2009 Homecoming week will certainly be one remembered for changes, as it came to a close with a senior quad day, a football game and an unusually clean dance in the gym the following night, Nov. 7.

Members of the Homecoming court were presented at halftime during the Nov. 6 football game against Cupertino High School.

Homecoming king and queen were seniors Guillame Bellegarda and Rita Chen, accompanied by senior princes Kevin Rollinson and Trevor Teerlink and princesses Jordan Leonard and Annie Lee. Junior Homecoming prince and princess were Jason Shiuan and Ren Norris, and the sophomores class was represented by Eric Wang and Annie Barco. Freshman Stevie Berman and Courtney Lee were elected for their class.

Nearly 24 hours after the Homecoming court strolled at the game, hundreds of students slipped into the Saratoga gym to participate in the Homecoming dance.

The administration recently cracked down on inappropriate dancing and dress, notifying the students that they would be pulled out of dances for disregarding warnings. If a second offense occurred during the dance, the student would be sent home following parent notification.

“We can see that trying to end [the dance style of] ‘freaking’ is not going to work out,” assistant principal Karen Hyde told one English class. “All we want is to make things more appropriate.”

Hyde obviously was successful getting this message across to students, calling the Homecoming dance “fabulous” and describing the students as being “extraordinarily responsive” to guidelines issued throughout the week. Administrators and teachers circled the gym throughout the night with flashlights to look for inappropriate dancing. The semi-formal dress code of the Homecoming dance as opposed to previous years’ casual dress, also added to a cleaner atmosphere.

“It was not gross and disgusting,” said Hyde. “I think kids really heard the message.”

In addition to approval from the administration, student reception of the dance was generally positive.

“I thought the dance was pretty good. For me it started off slow, but then it picked up,” said sophomore Annie Barco. “The DJ played most of the songs that are really popular right now, but he left out a few too.” Barco believes that students followed the administration’s regulations and said students were “better than usual.”

The compiled results of the Homecoming competition were also released, as the senior class dominated the competition with 633 points. Juniors placed second at 467 points, while sophomores scored 348 and freshmen tallied 171. One of the huge controversies regarding the week’s festivities involved the judges’ decision to rank the sophomores’ decorations higher than the juniors’. Guidance secretary Sharon Fong, one of the decoration judges, attributed the sophomores’ one-point victory to their detailed kitchen but added that the juniors did a good job as well.