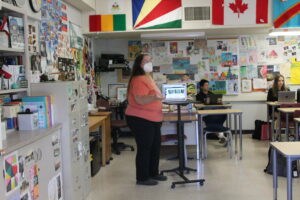 Think of France, and images of the iconic Eiffel Tower, sweet crepes overflowing with juicy strawberries or crispy baguettes slathered in brie cheese might come to mind. But France isn’t just about its glamorous reputation and or its famed food; its culture is a product of hundreds of years of history.

The French language classes dive into this culture, educating students about the holidays, history and general norms in France so that students can successfully communicate in the future if they ever visit France.

French teacher Elaine Haggerty, who teaches all levels of the language, French 1,2,3 honors and AP French, said a big part of learning the culture is knowing how to interact with people in France or other French-speaking areas. For example, she mentioned “La Bise,” a kiss on each cheek, which is a common greeting in France.

As the year goes on, the classes celebrate various French holidays such as Mardi Gras in February  and Poisson D’Avril in April. They hold parties and have students bring French-themed food to share with peers.

Haggerty fondly recalls how one of her students brought cooked snails to a class party.

“He made everything, from the butter to the herbs,” she said. “All the students ended up tasting them.”

French 3 student junior Zitong Wang learned about the French holiday Poisson D’Avril  through classroom activities where they decorated paper fishes with coloring utensils. The arts session reflected what people in France would actually do during the holiday: give fish to their friends and family.

Another major part of the French curriculum is a cultural project where students can pick their favorite aspect of French culture and delve deeper by visiting museums, making art pieces and cooking traditional French dishes.

“We cooked chocolate truffles for the cultural project and they were really bitter, but everyone in class tried them,” Wang said. “We had a lot of fun baking.”

“We learned about French provinces and specialties within each province, and French roots inside the U.S. such as New Orleans and Francophone countries,” Wang said. “[Because of the class], I’m not going to assume anything about cultures and will speak basic phrases politely.”