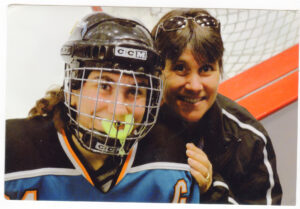 Kelly Leslie with her mom, Theresa.

Junior Kelly Leslie skates across the ice, passing the hockey puck to her teammate, and looks to a familiar face. As usual, her mother Theresa Leslie is busy analyzing the game.

Junior Kelly Leslie skates across the ice, passing the hockey puck to her teammate, and looks to a familiar face. As usual, her mother Theresa Leslie is busy analyzing the game.

Mrs. Leslie attends nearly every one of Kelly’s games, but to Kelly, her mother is more than just a parent spectator—she is a constant inspiration, role model and coach.

Although she no longer coaches Kelly’s team, Mrs. Leslie, a current hockey player on both Team Abby and in the Northern California Women’s Hockey League, can always understand Kelly’s worries and successes in the sport.

“She tells me how I can improve my game,” said Kelly. “[She also] boosts my self-esteem when it is low after I have a bad game or practice.”

With hockey experience starting in her mid-20s and seven seasons of coaching with the San Jose Jr. Sharks, Mrs. Leslie’s tips and analysis of Kelly’s game are an important part of Kelly’s training.

Kelly knows that when her mother offers a compliment or criticizes a decision she made on the ice, she is speaking honestly about what Kelly can do to improve her game.

Mrs. Leslie does not limit her guidance to after hockey games, but comes to Kelly’s aid any time she can and has become a constant mentor to her daughter.

Kelly said her mother influences many of her choices, ranging from what to eat for lunch to what classes to take. “She is always there for me to talk to when I need to, ready to help shine a guiding light,” Kelly said.

The pair’s enjoyment of both playing and coaching hockey strengthens their bond and allows them to spend quality time together, despite demanding schedules. Kelly and Mrs. Leslie both help coach the San Jose Jr. Sharks 8U team and once played together in the Northern California Women’s Hockey League.

“We don’t have as much time as we used to,” said Kelly, “but we always leave some time for each other.”

When Kelly is coaching younger hockey players, she tries to emulate Mrs. Leslie’s coaching strategies and make the girls laugh while explaining things in detail.

“I want to become as good a coach as my mom,” Kelly said. “That’s why I ask her for advice.”

With her mother’s influence, Kelly has developed countless similarities to Mrs. Leslie, including a deep love of literature. When Kelly was younger, sharing her ideas with Mrs. Leslie helped her take pleasure in writing, and now she asks her mother to write comments about essays for school.

“When I’m stumped about what book to read, I ask my mom for a suggestion,” Kelly said. “We also used to share our journal entries with each other.”

Kelly admires the perseverance her mother has shown throughout her life, even during difficult times, and finds inspiration in her mother’s ability to keep a level head.

“When things are hard she is able to put on a brave face and be strong for everyone else around her,” Kelly said.

While other students’ future aspirations often change, Kelly’s goal has always stayed simple. “I want to be as good a person as she is,” Kelly said, about Mrs. Leslie. “I want my kids to be able to say that I am their hero.”

Mrs. Leslie fills many roles in her daughter’s life. As a mother, a coach, a helping hand and a friend to Kelly, she can certainly be considered a true hero.