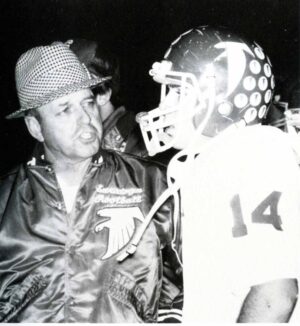 Coach Benny Pierce talks to a player in 1982, the last year that the Falcons beat the Cats

Let’s face it: It’s been a long 27 years for Saratoga football. As Saratoga students grew increasingly indifferent to the football program due to mediocre results, the program fell into a self-perpetuating slump that seemingly bogged down players, causing failures that only served to further alienate the fans.

Let’s face it: It’s been a long 27 years for Saratoga football. As Saratoga students grew increasingly indifferent to the football program due to mediocre results, the program fell into a self-perpetuating slump that seemingly bogged down players, causing failures that only served to further alienate the fans.

The side effect of this downward spiral was most apparent on one night every year: the rivalry game between Saratoga and Los Gatos. Since the regular season of 1982, Saratoga has continually fallen victim to the Wildcats—until last Friday, that is. The team from Los Gatos walked off the field defeated. One player’s eyes filled with tears. He had no idea what hit him.

The rivalry was not always so one-sided. In the ‘60s, ‘70s and early ‘80s, Toga held its own as a football powerhouse. Benny Pierce started his coaching career at Saratoga in 1959 as the JV coach. In 33 seasons as head coach of varsity Pierce never had a losing season. His teams won 21 league or section championships. His 1980 team went undefeated and finished the season ranked in the top 10 nationally. His 1987 team beat three undefeated squads in the playoffs, one of them being Los Gatos, to win the CCS crown. At the end of Pierce’s tenure, the crosstown rivals were enjoying a rise in prominence and as enrollment dipped at Saratoga High, hopes against the Wildcats dwindled as well.

After Pierce’s retirement in 1994, Saratoga began a slow slide into mediocrity. Despite occasional success, the team lost its hold in the upper rungs of local high school football. The team often found itself looking up to Los Gatos from a league below. The years continued to add up. Even when Saratoga seemed to be better such as in 1997 when they won CCS under coach Mike Machado, they still managed to be done in by the Los Gatos curse, losing 13-12 that year.

In 2001 a prodigy was leading a Los Gatos team—Trent Edwards, who started for Stanford and now plays for the Jacksonville Jaguars. Dave Lii, now an assistant coach at Saratoga High, intercepted a pass from Edwards and ran it back for a touchdown. Los Gatos would win that game 10-7.

In 2008 Tim Lugo was brought in as the new head coach. One of his first actions as coach was to implement the same Wing-T offense employed during the Benny Pierce golden years. That year, an unsuspecting Los Gatos team was caught off guard by Lugo’s highly motivated team. But the curse still held back the Falcons. An untimely fumble by Saratoga led to the game-winning field goal by Los Gatos with seconds left, leading to a 10-7 loss. Last year the Falcons fell 47-0. Even with the loss to the Wildcats, the team still managed to earn a CCS berth and reach the semi-finals.

Last Friday junior Troy Doles not only held tightly onto the game-winning interception, he also clung to a legacy, a proud history and a hope for the resurgence of a football program that had been dwelling in hardship. The momentous win has allowed the team to come full circle, to an almost forgotten yet slightly familiar place. How the Falcons carry out the rest of the season is still to be determined, but they have a strong forward push going into the last three games, and a major Wildcat off their backs.