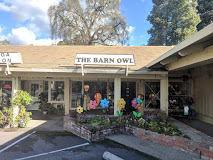 Although the high school is only a 2-minute drive away from downtown Saratoga, most students hang out at popular locations like the Starbucks on Big Basin Way instead of exploring the variety of establishments tucked around downtown including boutiques, small cafes and antique shops.

While many of these stores are not as popular as La Fondue or Big Basin Cafe, they each have their own fascinating history and niche offerings.

The owners’ commitment and passion help them remain an integral part of Saratoga’s quaint reputation. The Falcon profiled three of these shops.

The Barn Owl, a small antique store specializing in jewelry, books and gifts, opened in 2012 and is run by owner Leslee Warwick. Most of the items sold are unique knick-knacks from trade and gift shows that Warwick goes to in Las Vegas and Atlanta.

She said that she sells items that she would give her own family members like home decor, jewelry, seashells and garden decor such as gnomes and fake plants.

The shows she goes to are held in enormous convention centers and feature an extensive array of items for sale. There, Warwick meets mom-and-pop shop owners from all around the world. Big stores like Ace Hardware also attend to find products for their store.

In 2010, Warwick and her daughter opened a doggy daycare and gift shop in Cambria, near San Simeon — a business that accumulated debt. After Warwick’s daughter left the business in 2011, she chose to specialize solely on gifts and moved the shop to Saratoga.

Although Warwick thinks of the store as a family business, she believes that her kids and grandkids would not want to operate the store after she retires. Warwick is there six days a week, 10-12 hours a day, and is exhausted by closing time.

“I've spent the last eight years [working in the store], and it's a hard situation because every time you get close to paying it off you have to order more things for the store,” said Warwick. “I never quite get ahead.”

While a second worker would ease some of the workload off Warwick’s shoulders, the store cannot afford one despite Warwick not taking a salary. Their previous store accumulated a large amount of debt that Warwick is still trying to pay off.

“It’s a hard situation, because you get close to paying [the debts] off, and then you have to order more things,” said Warwick in regards to how she has to keep ordering new gifts for the store. But she hopes that increased advertising will attract more people to The Barn Owl.

Warwick also recently decided to sell Dole Whips, a pineapple-flavored frozen dessert popularized by Disneyland after a trip there with her grandson because she began to crave the frozen ice cream-like treat upon coming home. They sell for $4.

The store is located in the back of a small plaza in the middle of Saratoga downtown near Wells Fargo Bank and the Floral Fantasia flower shop, which prevents it from getting much foot traffic; instead, most of its customers are repeats who have been coming to the store for many years. However, Warwick says that she would not want the store in any other place because Saratoga fits with its charm.

Warwick said she knew the spot was perfect the moment she saw it.

“When I walked into the space, I could just see it,” said Warwick. “I don't know if I would have more foot traffic in a mall, but I'm not designed for a mall.”

Another challenge threatening the survival of The Barn Owl is the increased prevalence of online competition.

“Not too many teens come because they're all ordering on Amazon,” Warwick said. She said that even her family is guilty of purchasing all their gifts online, and that fewer people come in to shop than eight years ago when the store was started.

Even with these challenges, Warwick loves to work at a gift shop.

“My goal is just to make people happy. I want to find the right things for the right people,” she said.

The Echo Shop, located halfway down Big Basin Way, offers cheap, cute clothing and is managed completely by volunteers, who, according to store volunteer and Echo Shop board member Betty Chen, are there “purely for the love of the trade.”

Started by the women of St. Andrew’s Episcopal Church, the store opened in 1961 to raise money for outreach in the Santa Clara County. In 2015-2016, the Echo Shop gave grants to local organizations amounting to $76,000.

The profits of the store go directly to charitable organizations such as the Animal Care Center of San Jose, the Parisi House, Our Daily Bread and Next Door, an organization to combat domestic violence. Local non-profits write proposals to the board of the Echo Shop, who then determines if they fit with the Echo Shop’s mission of helping local organizations grow in the county.

Chen said that many of the shop’s customers are travelers coming to Saratoga to visit family and friends. Other shoppers include teenagers and loyal repeat customers. Chen said that some people even come in saying “I’m third generation Echo Shop!”

Clothing at the store is cheap and good-quality, appealing to a variety of tastes. Jeans can be bought for as low as $6, and shirts can be found for under $2. Chen encourages people to make quick, frequent stops, as volunteers bring out new stock often because the small size of the store restricts them from showing all their items at once. The boutique also has an open house twice a year, once in the spring and once in the fall, when they bring out a lot of their new material; in the weeks prior to the Open House, the entire shop is 50 percent off and there are other great bargains.

Many Saratoga students have also gone in the store before to check out what the store has to offer. Sophomore Shivali Kattumadam has bought many items at the store before, and loves going in there because she’s never sure what she’ll find. “The Echo Shop is definitely one of my favorite places in downtown,” she said. “It’s a place where you definitely spend a lot of time there to truly find something you love.”

The store is always looking for volunteers and encourages anyone interested to apply for a position working as a cashier or organizing the clothes. Currently, there are more than 100 volunteers, with the only criteria being that volunteers must commit to at least three hours a month.

Chen said that volunteering at the Echo Shop introduced her to lifelong friends and taught her how to take things slow and not overwork herself.

Hidden in the front of Oak Street to the left of downtown, lies the Book-Go-Round, which is the “best kept secret in Saratoga,” according to store manager Kristin Gragnola. The store is part of the Friends of the Saratoga Library, a community library support group comprised of approximately 750 members. Previously the Saratoga library, the store became a used bookstore in 1972.

With the constant flow of new arrivals, many customers stop in at least once a month to see what they can find.

Their contributions to the Saratoga Library opens up programs such as craft activities for children, PSAT practice tests, Introduction to Tai Chi, Galapagos Island Travel Program, and many others. Through the sales and other activities put on by the Friends of the Saratoga Library, the store is able to donate $140,000 to the library every year.

The Book-Go-Round is the place for people who enjoy reading a wide variety of books at a reasonable price. It is highly regarded by the members of the community as a reliable and welcoming bookstore.

“[The Book-Go-Round] place where people can donate books as they finish reading them or are cleaning out their homes,” Gragnola said. “We found that as the Marie Kondo book about tidying up became popular, our donations rose significantly!”

The store has many different genres of books to offer, including science fiction, research, foreign language and fantasy.  Book prices range from 50 cents to over $15 for the larger books. The average settles at an affordable $1.50 per book. Apart from books, the store also sells CDs, DVDs, bookmarks, postcards and other small knick-knacks.

Friends of the Saratoga Library is a place where one must come to be ready to stay for a while. The shop employees do not know exactly where each book is, so shoppers can find other interesting books while searching. Even famous retired actress Olivia De Havilland took interest in the store before, according to Gragnola.

After almost 50 years, the store is still going strong due to the constant stream of active volunteers. In fact, the store runs entirely on volunteers, who work as many 2 1/2 hour shifts as they would like per month. There are around 150 volunteers who put in over 1,000 volunteer hours every month.

The store offers students an opportunity to give back to their community and is always looking for more volunteers.

The store is a place where customers can find themselves spending hours in. Whether or not they end up buying a book, they will surely have a great time discovering one of Saratoga’s oldest treasures.

Another must visit apparel store is Charlie’s, which was founded in 2015 and offers cute clothing as well as home staging and design. It is located near the edge of downtown next to the Big Basin Burger Bar.

While the store gets customers from all ages, it mainly caters to teenagers and young adults. The owners, sisters Esther Nazarov and Teresa Zyuzin, who named the place after their dad, Charlie, love downtown Saratoga and wouldn’t trade their location for any other place. However, they recognize the problem of a lack of foot traffic because of the minimal clothing stores in Saratoga.

The store gets its customers through word-of-mouth and distributing flyers, and hopes that passersby will also check out their stores. They have recently started selling many sweaters and cardigans to gear up for fall.

Before the Saratoga store opened 4 years ago, but Nazarov and Zyuzin had a store in Campbell. The two have always had a love for home and interior design and decided to start a store while also including clothing, both formal and casual, and jewelry so that they “do a bit of everything.” They love Saratoga downtown because of its special charm that makes them feel at home.