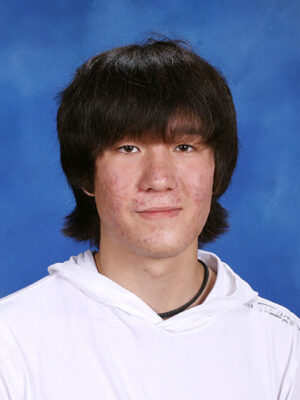 To most people, senior Jonathon Stutchman is a student, a leader, a classmate, a friend, and even a musician, yet few people know that behind his quiet exterior Stutchman harbors a hidden talent: He is a composer.

His talent and passion for both writing and playing music has remained generally unknown because he has little involvement in the school’s music department.

Stutchman is a self-taught composer who has penned more than 40 full pieces of music, of which two have been published.

“I can’t tell a lot about music, but I think a lot of composing is the music inside you and being able to convey that out there,” said Stutchman. “So while I am terrible at singing and it’s pretty hard or me to tell what someone else is playing, (but) usually I can write it down and get it out that way.”

Stutchman didn’t start officially composing until sophomore year, when he taught himself how through the help of books and an occasional critique from choir director Jim Yowell.

Music has always been a huge part of his life. Since age four, he has been playing the piano and worked his way through the Certificate of Merit program, finishing it during his sophomore year. Besides piano, he plays the guitar and bass guitar and has occasionally played in local rock bands such as Revive the Lifeless. He also writes poetry on the side, although he rarely combines his music with his poems as most of his music has no lyrics.

Stutchman composes and plays music in both the classical and rock genres, even though he prefers to listen to more hip-hop and rock on a day to day basis.

“I listen to a little bit of classical, but only when I’m interested in appreciating it,” said Stutchman.

On a typical week, Stutchman will spend anywhere from seven to 10 hours composing and practicing music. So far, his hard work has paid off through the publication of an original string quartet and an original rock song.

In addition, local rock bands such as Revive the Lifeless have played some of Stutchman’s music.

When Stutchman sits down to write, he has a purpose and a message he is trying to express through his music. Observations fuel his inspiration.

“The people around me and stories I hear about them inspire me,” said Stutchman. “Some music is a feeling I am trying to capture and other times it is a story that progresses. Sometimes instead of seeing things I hear them.”

While writing, Stutchman first plots out the piece and then proceeds to trying it out on the guitar or piano. To complete the work, he uses a program called GuitarPro to polish the sound. After finishing each new composition, Stutchman often seeks the advice and feedback from close friends and family.

Looking toward the future, he said, “I’d like to still continue [music] in college. I don’t know if I’m going to major in music, but I’m still going to be writing.”

He would love to composes music for plays or movies.

“If I got to compose the background tracks, that would be really cool,” said Stutchman.

For people aspiring to compose their own music, Stutchman advises, “Just have fun with it. A lot of the reason why I like composing is because I have fun and I like seeing the satisfaction of what I did. You can find [inspiration] anywhere and after that it’s just work.”