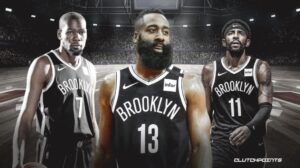 After splitting from the Oklahoma City Thunder in 2016, guard James Harden and forward Kevin Durant reunited at the Brooklyn Nets earlier this year in February.

Although Harden is a superstar by almost every statistical measurement, he has never been able to bring a championship to his previous teams, the Houston Rockets and the Oklahoma City Thunder.

This season may be different. When Harden joined the Brooklyn Nets early in the season after a trade he demanded, the latest superteam-centered team emerged. Now, as the season draws to a close, the Nets are among the favorites to win the Eastern Conference and face teams like the Lakers or Jazz or Clippers in the finals.

Harden’s last few years have been, at the very least, turbulent. In 2017, point guard Chris Paul and Harden nearly defeated the unstoppable Warriors, but relations fell off and Paul was traded to the Thunder. The following year, guard Russell Westbrook replaced Paul, but the Rockets suffered yet another defeat at the hands of the Warriors. When the Warriors disbanded during the 2020 season, the Rockets altered their lineup to provide spacing for Harden and better 3-point shooting, yet still ended up taking a 4-1 defeat to the Lakers.

These events led Harden to demand a trade away from the now-rebuilding Rockets, ultimately landing him in Brooklyn with Durant and Irving.

Now sharing his previously independent scoring production with two other superstars, Harden missed out on being an All-Star starter in the Eastern Conference, but despite this, his level of play has not decreased at all, as proven by his impressive averages of 24.9 points, 11.1 assists and 7.3 rebounds a game.

For Harden, winning an NBA title is his first priority. In order to preserve his legacy as one of the strongest offensive players of all time, Harden needs to not only win a championship but also continue to maintain his role as a key player on his team’s overall strategy.

Looking forward, it seems that the Nets are planning to use their unrivaled offensive capabilities to outscore the best teams in the West, which will make for an exciting game for fans to watch. This strategy is not unbeatable, however, demonstrated by the double loss that the Nets suffered to the Cleveland Cavaliers earlier this season. Although the Nets roster may not have been at its prime, the fact that guard Collin Sexton, a second-year NBA player, scored 42 points against them should hint at the Nets’ defensive liabilities.

Fortunately, the current Nets have solved some issues that the Rockets faced. With Durant and Irving on the team, Harden will be able to take on a lesser scoring load, meaning more rest and better focus in the parts of the game that he is most relied on.

Their bench is not a major weakness either, as center Deandre Jordan fills up one of their biggest weaknesses: their lack of paint presence. In addition, they received Andre Drummond and Blake Griffin, two all stars, in deals last week.

If the Nets do manage to make it to the finals against, for instance, the Lakers, I believe they will triumph in an intense 7-game series.

To win, though, Harden must maintain a top level role within the Nets. With a few more All-Star appearances and perhaps two championships, he will be able to cement himself as one of the best shooting guards in basketball history.