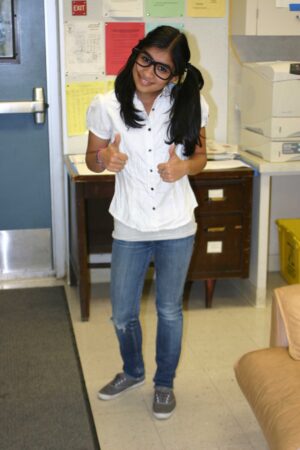 Aashna Mukerji poses as a nerd

The typical SHS student is thought of as too busy studying to ever have time for a real social life. Grades are all that matter—not friends, parties, or sports—just grades. Although you only find the stereotypical nerd with bowties, khakis and suspenders on television, here are some tips to achieve a level of nerdity that you can be proud of.

Being obsessed with grades is the perfect place to start. Everything in your life should revolve around your GPA. Always be looking for ways to get ahead of the rest of the people in your classes. If it’s not an A+, it’s not good enough.

“I check Aeries obsessively. At least twice a day, if not more,” said sophomore Abigail Lin.

Push yourself as hard as you can. Sleep is important but pales in comparison to the thought of not acing an assignment. If you have nightmares about missing a point on a test, listen to Mozart to soothe your nerves.

Nonetheless, academic pressure can only exert so much of an influence on your reputation.

“I would classify a nerd as someone who isn’t particularly social, and who enjoys spending time studying or on a computer more than time spent with other people. Also, having glasses doesn’t hurt,” said senior Tom Clark.

Throw out any shirts you own that aren’t collared or pinstriped. If you want to let loose and accessorize, put on a sweatshirt promoting a respectable Ivy League college. Make sure to be properly groomed, with a straight parting down the middle. No bangs allowed; they’re frivolous. To have fun, if you need to fill up any extra space in your schedule, join the math or chess club so you can learn in your free time. Knowing Klingon in addition to other obscure languages (Elvish, HTML code, etc.) never hurts.

Study by candlelight in order to reach your full potential—if you’re lucky, your eyesight will deteriorate enough for you to need glasses, which will complete your image. If you’re dedicated, act pathetic in social situations so someone beats you up and breaks your new glasses. Fix them with tape, and you’re well on your way to becoming the epitome of nerdiness. If your mother still picks out your clothes, you get bonus points.

Awkwardness usually accompanies nerdiness, coupled with fear of social interaction. Don’t let the fact that you spent more money on orthodontia than you ever will on your car bring you down. Remember: The popular jock you sit next to in English will probably work for you in 10 years.