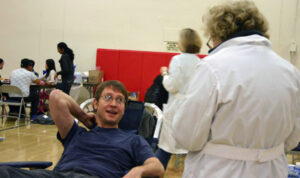 Every two seconds, someone in the United States needs blood. Saratoga High students helped save these individuals’ lives by generously donating blood in the Stanford Blood Drive Jan. 29.

The bi-annual blood drive was hosted by the SHS Community Commission and was scheduled to run from 8 a.m. to 2 p.m. in the Small Gym. Although many appointments were pushed back
because the Stanford Blood Drive truck broke down along the way to the school, the drive had a good turnout of 69 donations, according to head commissioner Daryl Chang.

Many students were inspired to donate their blood by the idea of making a difference and potentially saving the lives of others in need of a transfusion.

“I was motivated to donate because it is important to help people who are in need of a blood transfusion, ” said senior Shawna Shirazi. “Since people know that they can prevent death by donating, everyone should.”

Many students afraid of needles or blood were reluctant to volunteer for the drive, but Shirazi believes that students can overcome their hesitations by focusing on the lives they can help to save.

“I don’t think people should be scared of needles because the outcome of donating is more important—if no one donated, lives would be lost,” she said. “I have given blood before and it doesn’t hurt that much, so everyone should donate.”

Students were required to meet certain criteria to donate blood in order to ensure the safety of the donors and the quality of their blood. Students must be at least 17 and weigh at least 110 pounds and cannot have traveled to a third-world country within the past year. Volunteers must also have a high amount of hemoglobin in their blood.

The Community Commission will be holding another blood drive in April.