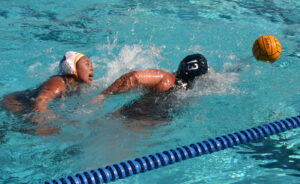 A swimmer lunges for the ball during water polo practice.

With water sloshing around the players, chlorine stinging their eyes and constant thrashing that makes voices hard to hear, teamwork is not only difficult to achieve but essential to a water polo team’s success. This year’s girls’ water polo teams have an additional hurdle to face: an unusually low number of veteran players, resulting in time spent teaching the new, more inexperienced players the game from scratch.

“We have a lot of new people on both varsity and JV,” said senior varsity captain Mackenzie Crase. “It has been pretty tough for us, especially at the beginning, because we’ve never played as a team before. We have had to work with the way we communicate, getting used to each other’s playing styles, and working together. It has been a challenge, but we’re ready to embrace it.”

This year’s team has been one of the smallest ever. With 11 players on varsity and eight on JV (with no substitutes due to injuries), both teams have faced challenges during games.

“We tend to get really tired during games, and a consistent quality of many great teams is their number of players alone,” said junior Nicole Shadman. “With such a small amount of players, we can’t switch out as much as we would like to, but we just have to try and get through it.”

The team’s league season has begun with a rocky start with a 5-14 loss against long time rivals Monta Vista, a 4-13 loss against Los Gatos High and a 1-17 loss against Gunn High. But these losses haven’t sunk the team’s positive attitude.

“Even if we lose, our coach, Courtney Crase always encourages us,” said senior Joyee Woodrow. “She makes sure that we know when we are playing better, because the teams we play against will always change, but our technique is the only consistent thing we have to compare. Sometimes we’ll have a really bad score on the board, but we are still extremely proud because we know we worked hard and put a lot of effort into the game.”