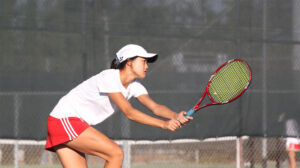 Junior Crystal Yen plays in a match during CCS

After months of practice and anticipation, the girls’ tennis team beat longtime rival Monta Vista 6-1 on Nov. 17 at Courtside to win a back-to-back CCS championship, with both wins over the Matadors. The victory put the team at 22-0.

“The girls surpassed expectations by 100 percent this year,” said head coach Tom Uyehara. “Monta Vista has always been a tough matchup, as a lot of games could have gone either way.”

No. 3 singles senior co-captain Catherine Nguyen and No. 4 singles freshman Kalyani Narayan contributed significant wins early in the afternoon to take pressure off their teammates. No. 1 singles player junior Crystal Yen won easily 6-1, 6-2 over her opponent senior Sylvia Li, who plans to play for Harvard next year.

Both No. 2 singles player Srinidhi Raghavan and the No. 2 doubles team of senior co-captain Mary Edman and sophomore Niharika Bedekar closed out their matches with tiebreakers in the second set.

The sole match on Monta Vista’s scoreboard came from a close tiebreak win after split sets against the No. 1 doubles team of juniors Sarah Lum and Lisa Asai.

Both Monta Vista and Saratoga advanced to the CIF Norcal Championships in Sacramento on Friday and Saturday, Nov. 19 and 20, representing the Central Coast Section (CCS). The games were rained out on Friday afternoon, but Saratoga was able to complete its quarterfinal round 7-0 against Chico High.

The girls will meet Redwood High, a team they played in the second round of the Fresno Peachtree tournament in September, in the semifinal round, which is now postponed to Wednesday, Dec. 1. The final round is currently set for Dec. 2.