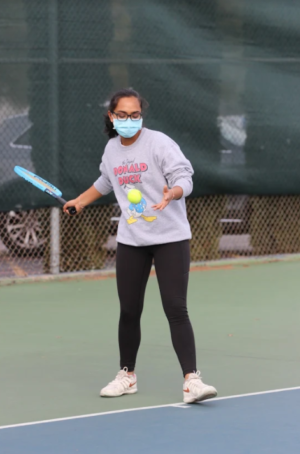 Sophomore Samika Agarwal focuses as she is about to serve the tennis ball during practice.

On the tennis courts, girls from different grades start off their practice with a big smile under their masks as they greet each other. Laughter rings through the courts as the captains of the JV and varsity teams lead tennis players in their warm-ups.

Since their last season ended in October 2019, the team was unable to return to campus until this February with new safety guidelines, led by JV coach Benjamin Brotzman and varsity coach Florin Marica.

To stay safe during practices, the team uses hand sanitizer stations placed at the entrance of each tennis court, and players must wear a mask at all times. Tennis balls cannot be wiped, so players are given their own can of balls so they only touch their own. In matches, only the home team touches the score tracker.

This year, the varsity team has 12 players, with senior Juhi Patel as No. 1 singles and No. 1 doubles sophomore Melody Lin and junior Catherine Kan, while the JV team has only eight players. The lineups for both teams are still fluid. Marica said that since the cohort system only allowed students to participate in one activity on campus while tryouts were occurring, fewer students chose to join the tennis team. In case injuries happen, Marica wanted to make sure there were extra players on varsity.

On Mondays and Wednesdays, both JV and varsity usually practice on the two tennis courts on campus. Monday practices last from 3 to 4:30 p.m., while on Wednesdays, the coaches aim for an earlier time like 1:30 p.m. However, the practice times are flexible depending on the coaches’ schedules.

Both varsity and JV coaches agreed that their athletes could use extra practice to get back in shape after such a long break. Brotzman suggested that students do workouts outside of practice to regain or build up their abilities and endurance without going overboard.

“In terms of conditioning, there’s a certain level of [a need to] build students back up to probably where they would be in a normal year,” Brotzman said. “It’s kind of a delicate balance.”

Tuesdays and Thursdays are match days, although the JV team typically only compete on Thursdays. Brotzman said the JV team uses this as an opportunity to build up a bond between teammates and to do various drillings to learn from each other.

In season one, varsity girls tennis won five out of ten matches played. The coaches said that the players continue to face their losses with a positive attitude. Instead of letting their defeats bring them down, Brozman said that they talk about what they plan to improve on for the next week. For varsity, “these wins and losses do not really matter right now,” Marica said, because everyone has just resumed practice and are more focused on getting better.

“They don’t leave with that depressed look on their face, [but with] the next steps in mind,” Brotzman said. “I find their resiliency really wonderful, and as a coach, and I am here to make sure that this continues.”