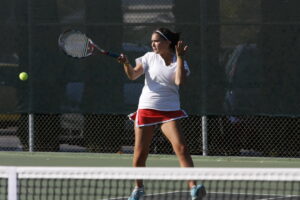 Senior Mary Edman swings at the ball during practice.

Winning the Fresno tournament earned Saratoga the title of best high school girls’ tennis team in California. So far, the girls have met and surpassed the high standards other schools have set by defeating their opposition.

“The expectations are now very high, and that puts a lot of pressure on our players to perform each week to their capabilities,” said coach Tom Uyehara. “As long as the team stays focused, I think we will do very well this season.”

Falcon players said they need to stay humble and consistent by winning all their league matches.

“We do have big expectations because of winning Fresno,” said No. 1 doubles senior Mary Edman. “We are considered the top team in California, so every team in our area is gunning for us and wants to be the ones to beat us. I think we can handle it; we just can’t let any victory go to our head.”

Even though there has been a lot of changes in the lineup due to players sitting out for various reasons, the team has still managed to pull out large victories over strong teams.

The first league match was against Homestead on Sept. 16 in which Saratoga emerged victorious 7-0. They also beat Palo Alto 6-1 on Sept. 21 with two of the top singles players sitting out including No. 1 singles player Srinidhi Raghavan, a senior, and No. 3 singles Kalyani Narayan, a freshman.

“I think our team did fine when we played our first few league matches. They weren’t as challenging as the ones in the Fresno tournament, but it still is important to not forget that these matches are just as important,” said Edman.

On Sept. 23, the girls whipped Los Altos 7-0. This and other victories showed the strength of the doubles teams.

“I think our doubles teams are our strongest factors because if you are able to sweep in doubles then it takes the pressure off the singles,” said Edman. “But if we lack team dynamic when certain people are down, it could become a problem.”

Raghavan said the most important factor for doing well this season is to just win a few key matches and to continue staying strong.

“We are undefeated so far and have played two of the other top three teams in CCS, besides ourselves. We have played well so far, but there is always room for improvement,” said Uyehara.

The team’s goal is to make school history by winning Norcals and repeating their reign as CCS Champions. To do so, though, they must continue winning all of the league matches and beat Monta Vista on Oct. 5, the second toughest team in the league.

“After Fresno, we haven’t hit a tough challenge yet, but when we play Monta Vista, that will be our first real challenge of the season,” said Edman.

The team is looking forward to an oustanding season, perhaps one of the strongest in years.

“The season is still long from over, but I am happy with our start so far,” said Uyehara. “Hopefully the team will stay on point so we can reach our ultimate goal of repeating as CCS champions.”