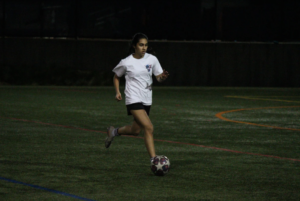 Following a division drop after last season, the team is focusing more on building a better foundation since the school has a smaller team this year and lost seven seniors to graduation last year.

This year, 30 players registered to try out, but the school mandates that there will only be a varsity team, Maxwell said.

“I’m not sure what size roster we will carry, but due to the long break in between this season and last, I expect to have a larger roster to deal with injury and fatigue,” Maxwell said.

“The first week of practice was nice to get back into the groove of playing soccer again with contact, which has been difficult with the pandemic,” junior Lauren Yarrington said.

The team is preparing for their first game of the season on March 15 against Wilcox. This season will be cut short, with only eight weeks and but still playing 11 games total.

While there may be safety concerns, the coaches are making sure the necessary precautions take place, including social distancing during drills and water breaks.

“The reality is that we now live in a COVID conscious world, so it is important to ensure player health and safety,” Maxwell said.