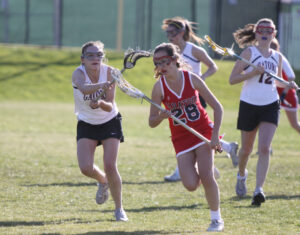 It’s only the second year since the girls lacrosse team first started at Saratoga. The relatively new team has had new coaches and a string of losses this season, but they are gaining experience and skill as the season progresses.

“They’ve improved immensely,” said head coach Leni Rodgers. “The whole JV team, none of them knew how to play before the season started, so now they know how to throw and catch and play on the field. On varsity, now we are incorporating plays and we have a stronger defense.”

“Our ground balls weren’t very good,” said junior home and attack Ellen Scott. “Our passing and communication wasn’t as good as in previous games. But we had some pretty good checks. There were some that were called, but most of them were really effective.”

It was a disappointing follow-up to a close loss at home to Leland on March 24. Saratoga fell short 10-9 after Leland scored in a double overtime.

The Falcons had been leading the majority of the game with the Chargers trailing behind and scoring to tie the game. When the clock ran out the score was tied. It remained tied in the first overtime until Leland ultimately broke the tie in double OT.

“I think it went well,” said junior 3rd man Abby Frankola “We played a really tough game against a team who had played longer than us. We really put pressure on them and maintained possession well. They simply slipped one in at end, but overall we played a better game than them”

“It felt great to win,” said Frankola. “It let us experiment with plays and work on our skills.”

With each game, the team has been trying to integrate new and innovative plays. Their main pick play is “rush,” in which a player blocks the opposing defender allowing another forward get free and shoot. The offense is led by junior attack wing Vanessa Block, junior center Ren Norris and senior home Jodi Huang. The defense is headed by sophomore goalie Megan Benzing and senior point Sophia Cooper.

“The team can work on communication they can improve on working on defense and talking to each other and knowing where they are,” said coach Rodgers. “We won against Harker and hopefully we can win again next time.”