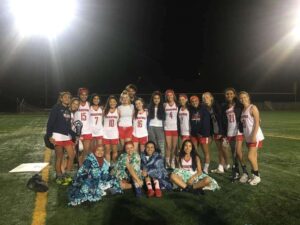 Junior Macey Hartmann, varsity girls’ lacrosse forward, practiced her stick skills in her front yard after a field hockey practice. Despite not being able to participate in the optional lacrosse practices on Mondays and Wednesdays due to cohort restrictions, Hartmann has been using field hockey conditioning and independent practice to prepare for the season.

Although girls’ lacrosse lost several key players from the class of 2020, such as alumni Risa Carter and Kathryn Hamilton, the majority of the team will be returning to play this season. The girls will play the first game of the season against Palo Alto at home on April 19.

“I think that getting back into games will be a challenge given how short this season is,” Hartmann said. “We are just doing the best we can to prepare through pre-season practices.”

Head coach Marlo Lile designs the practices so that players are relatively distanced from each other, and players have to wear masks during these practices. While masks are not mandatory during games, they are still heavily recommended.

Despite all the new developments and restrictions, the girls’ lacrosse team is hoping for a successful season after not being able to play for almost a year; more than anything, they are looking forward to playing together again.

“Winning and going to CCS are all super exciting, but a big part of what makes playing high school sports so special is being able to develop that team chemistry,” Hartmann said. “I’m so ready to be able to work together with my team again.”